The First Meteor Shower of 2017 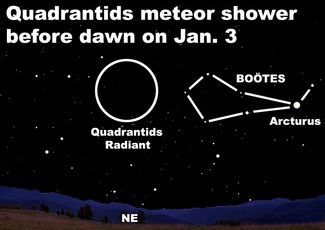 If you missed the Geminid meteor shower of mid-December (and most of us did because of bright moonlight), you've got another chance. Not with the Geminids, of course -- they won't return until next December -- but with the Quadrantid shower, which peaks on the morning of Jan. 3, 2017.

Never heard of it? I'm not surprised; few beginning stargazers have. By anyone's definition, the Quadrantid shower is unusual.

First off, there's its name. A meteor shower is usually designated by the constellation out of which its meteors seem to radiate. But that's not the case with the Quadrantid. Its name comes from an obsolete constellation of the 19th century, Quadrans Muralis, located just north of Bootes. The International Astronomical Union removed it in 1922 when the organization adopted the current list of 88 constellations.

Another odd fact about the Quadrantid shower is that no one seems to know its origin. Most meteor showers are caused by dusty particles that are boiled off of passing comets, but astronomers have yet to find any such comet that matches the orbits of the Quadrantid meteoroids. So the puzzle remains.

Still another unusual fact about this shower is that while most other showers can be watched for days, this one only lasts for a few hours. If you miss the few hours around its peak, you pretty much miss the entire thing.

The 2017 Quadrantids should provide a pretty good show to North American stargazers. The shower will reach its official peak on the morning of Jan. 3 around 7 a.m. PST (10 a.m. EST). The best times to view it will be an hour or two before dawn that morning. Unlike last month's Geminid shower, the moon will not appear in the sky, so its light will not interfere at all. Astronomers predict that an hourly rate of 100 to 120 meteors might be possible for viewers located away from city lights, and that's every bit as good as a moonless Geminid shower of mid-December.

The Quadrantids appear to radiate from a point just north of Bootes, high in the eastern sky after midnight. Bootes, the herdsman, looks more like a kite with the bright yellowish-orange star Arcturus marking its tail. One can also imagine that it's shaped like an arrow, which conveniently aims toward the shower's radiant.

But that's not where you want to look. Remember, just like with every other meteor shower, you need to take in the entire sky with your eyes, and the best way to do that is to lie back on a sleeping bag or lawn chair. Dress warmly, though. It will be cold.

Meteors will appear everywhere, but you will know whether they are true Quadrantids by tracing their paths backward. If the paths appear to converge near the radiant, their meteors are indeed part of the shower. If they don't, they are just sporadic meteors caused by the many random interplanetary dust particles striking the Earth's atmosphere.

2017 will be filled with amazing celestial events you won't want to miss. My recommendation is this: Bundle up and head out to a dark sky site to view a meteor shower in celebration of the beginning of an exciting new year!