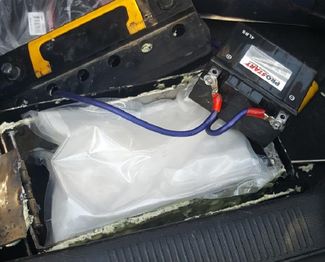 Nearly 5 lbs. of narcotics were stuffed inside this modified car battery.

At approximately 1p.m., a 27-year-old man approached the Border Patrol checkpoint in a black 2013 Dodge Charger.

During primary inspection, the man stated that he was a citizen of Mexico and presented a resident card to the agent. A Border Patrol detection canine team performed a sniff of the vehicle's exterior and the canine alerted to the vehicle. The agent sent the driver to secondary for further inspection.

"Criminal organizations will go to great lengths in order to carry out their illegal activities," said Chief Patrol Agent Rodney S. Scott. "I commend our hard-working agents for their exemplary efforts in keeping these harmful drugs out of our communities."

The methamphetamine and heroin had a combined weight of 4.53 pounds and an estimated street value of $49,970.

The man, vehicle, and narcotics were turned over to the Drug Enforcement Administration for further investigation.