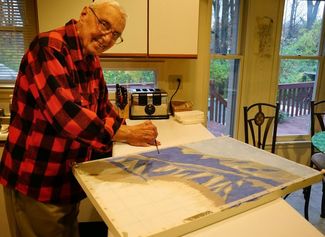 The Borrego Springs 2017 Film Festival poster and program will be created by artist Jim Hall, whose daring new painting style and life story are the subject of the award-winning documentary, Lines of Sight. The hour-long film will stage its California premiere at the festival

Hall created a new painting style called "Lineillism" after his vision was temporarily marred by a case of Shingles. He saw the world in all vertical lines and decided to paint that way. The style is similar to Pointillism, but instead of dots, Hall uses all vertical brushstrokes - up to

The 84-year-old artist selected an iconic scene of a road leading to Borrego Springs, which he is painting in his Lineillism style. "I knew the moment I saw the photo online that I'd found my poster," said Hall. "Most of my Lineillism paintings are landscapes inspired by my favorite

places so I think this will work out pretty well."

Hall and Lines of Sight Director Steve Oldfield met Borrego Springs Film Festival committee members Alicia Wszelaki and Matthew Nothelfer at Louisville's International Festival of Film, where they both had documentaries playing. Wszelaki and Nothelfer encouraged Oldfield to enter his doc for the Borrego Springs Fest. Once it was selected, the committee members wasted no time asking Hall to create the poster. He has been working on the painting since November 20th and will complete it by Mid-December.

Hall and Oldfield have never been to Borrego Springs but they will be coming to the festival and bringing along some of Hall's Lineillism paintings for festival goers to check out in person. "I can't wait to see the desert - it may look like a barren landscape at first but when you l look more closely, it's teeming with life," said Hall. "It looks like a beautiful, magical place." he said. Oldfield says the poster commission was an unexpected bonus to a journey that started for him and Hall back in 2015 after a chance meeting brought them together. "I knew the first time I saw Jim's incredible paintings and heard his life-story that it was a story I HAD to tell," Oldfield said. "We are honored to be coming to such a great festival and I can't wait to be a part of it."

In a way, Hall's trip back to Southern California comes full-circle. As a young man, he joined the Navy and was stationed in San Diego. An injury forced him to accept an honorable discharge and instead of returning to his hometown in Kentucky, he took the few hundred dollars he received from Uncle Sam and bought art supplies and set up shop on the beach in Santa Monica, where he lived homeless for about a year and took art classes at UCLA. Hall ended up working at Procter and Gamble and eventually transferred to their headquarters in Cincinnati, where he has lived ever since. "I never wanted to leave California but duty called," Hall said. "I didn't think I'd get back - and now, I get to do it in style - and see Borrego and what looks like a really great state park."