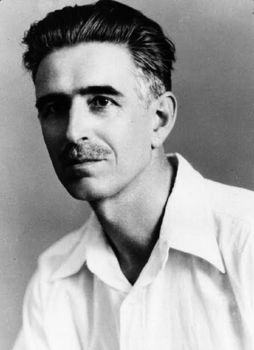 The enigmatic Marshal South is the controversial writer, poet, and artist who homesteaded on Ghost Mountain in Blair Valley. He and his wife Tanya raised three children on the waterless mountaintop during their experiment in primitive living during the 1930s and 1940s. He was a prolific published writer who died in 1948 soon after the experiment ended. He is best known for his monthly columns written for Desert Magazine between 1939 and 1948. Many of his desert articles and poems were never published. This column will explore many of his unpublished works and those of Tanya South, beginning with a work in 14 chapters entitled: "Desert Refuge," describing the move to Ghost Mountain. This is an exclusive to the Borrego Sun granted by Diana Lindsay, who was bequeathed Marshal South estate items at the passing in 2016 of Rider South, the Marshal and Tanya's oldest child.

Man is a creature of the Earth. He needs the unevenness of its surface beneath his feet; the grit of its soil upon his hands, and the tasks of its intimate contract in his daily life. The further he removes himself from these fundamental things, the closer he approaches his own destruction.

We live in the desert. Hunched among mighty boulders our little house hugs low upon the crest of a grim and barren mountain. Before it lies the hazy distance of the Vanished Sea; behind it the mighty lift of the coast sierras of California. Rocks rim it and the savage spines of cactus and of mescal guard it in embattled array. There are no roads to it and nothing on wheels can penetrate its solitude. In summer the sun blasts it with heat and in winter the winds roar across it with ice and driving snow. It is lonely and it is lost....And it is HOME.

Not always did the mud walls of the little low-roofed house crouch here among the rocks. Before its advent there were only mescals and junipers and ocotillos and giant boulders and sunshine – a savage mountain top visited only by "unprogressive" people whose skins were brown and whose tastes were simple. But that was in the long ago, in the time before they – like all other "simple" people – withered before the Glorious March of Progress. They left little behind them to attest their visits – a few fragments of shattered ollas; a few broken obsidian arrowheads; a few ironwood digging sticks....and a lonely dotting of stone ringed, fire-scorched circles on the harsh, gravelly earth – hearths where they roasted the hearts of the dagger-leaved mescals. A simple people.

But "Progress" arrived in the land. It passed the desert rocks unseeingly; but it stalked to the eastward and to the west; to the north and to the south. The simple people wilted and were gone. Silence came to the mountain; loneliness and silence that held only the wistful haunting of shadowy brown ghosts....Anyway the Indians were a "tired" and "most unprogressive" people. The years marched on without them. The old trails dimmed in the scour of the desert storms. The winds drifted sand upon the old hearths and scattered the ashes of the ancient fires. Silence and Solitude.

And then, at length, upon a day in the desert Spring, there came other "tired" people to the Mountain of Ghosts – two of them. Upon the old trails that reached downward like think, dim threads from a lost freedom, they clambered upward to the summit.

Progress had never trodden here. Silent and vast, far below and away to the east, the desert rolled its dim leagues. Hush was in the air – a hush of welcome. It was as if the dim, wistful ghosts, lurking in the shadows of junipers and the concealment of the Titan boulders, recognized old friends and cried out in voiceless greeting. Peace fell upon the two who had climbed. A long, long search was ended. Swiftly, instinctively, they shed their choking clothes and piled them in the crevice of a giant rock. Happily, as Adam and Eve in the first Garden, they set out in careful, barefoot caution to explore.

Thus was the "homecoming."

Visit the Begole Archaeological Research Center Library where many of Marshal and Tanya South's artifacts are on display this desert season, including paintings, sculptures, pottery, jewelry, and photographs. The library is open to the public on Tuesdays from 10 am to 2 pm. Marshal South's published works are available at the Park Visitor Center and at other outlets in town. Special South programs and field trips to Ghost Mountain are scheduled January 13, February 11 and 14, and March 25-26.Contact Anza-Borrego Foundation for more information 760-767-0446.