The Salton Sea is No Picnic 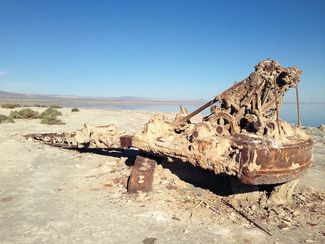 Kevin Kelley, General manager for Imperial Irrigation District (IID), stated "Salton Sea is no picnic, people have always talked about addressing the issues but not much action has been taken.", despite the topic of cleaning up the sea being argued for decades.

At a meeting Tuesday in Sacramento, Kelley urged the State Water Resources Control Board to take immediate and definitive action before the end of this year, calling for the state to draft a 10 year roadmap plan to restore the Salton Sea as there is currently no plan in place, and Kelley fears that by 2018, it could be too late, as more of the dry lake bed is expected to be exposed by then.

The goal is to restore habitat, and make the sea smaller to minimize health and environmental impacts if the sea becomes a giant dust bowl.

Bruce Wilcox had created a ten year plan for canals to be constructed in order to bring in fresh water from the Alamo and New River, to stop the depletion of water. He also proposed to create wetlands for birds etc. which would also reduce the amount of dust let up in to the air. Plans which are still in place, but have yet to be acted on.

"One of the problems," says Kelley, " is that the majority of people around the Salton Sea are Latinos and they don't have the same income levels as people in San Diego."