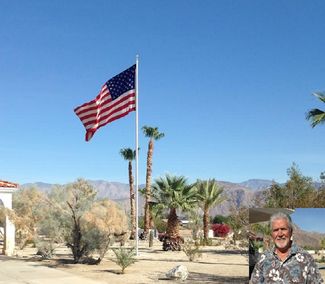 Flag that flew over the Blue Ridge (LCC-19), the flagship directing evacuation operations of the U.S. Embassy during the fall of Saigon in 1975. Owner Roy Silliker inset.

It's just over forty years old with subtle signs of wear and tear when you look up close. But when fluttering in a mild westerly Borrego wind atop its 30-foot high flagpole, this approximately twelve-foot wide by nine-foot tall American flag evokes familiar historical images. Those of a bittersweet end to an unpopular two-decade war that took the lives of over 58,000 American soldiers, seamen, and airmen, plus more than a million Vietnamese soldiers and civilians.

The Vietnam War ended in 1975, and the flag shown in the accompanying photo is owned by Borrego resident and former U.S. Marine Captain Roy Silliker. Silliker's flag once flew proudly over the Blue Ridge (LCC-19), the command and control flagship supporting a U.S. Navy amphibious task force that rivaled in numbers the Inchon landing in Korea. The Blue Ridge sat nestled in a rescue flotilla stationed a little more than thirty miles off the coast of South Vietnam.

Operation Frequent Wind was the name for the mass evacuation of Americans and at-risk Vietnamese during the fall of Saigon, centered on the U.S. Embassy. Silliker and his fellow Marines had to stay so far offshore because North Vietnamese Army (NVA) regulars were known to have captured artillery that could fire very large and deadly shells accurately at ships up to thirty miles away. They never did so, for reasons only speculative, but the Marines were not about to take chances and kept a respectful distance.

Roy Silliker will have the Blue Ridge flag flying this Friday, Veteran's Day, at his home on Lazy-S Drive near Verbena Drive, and visitors are welcome to view the flag from the street or dirt shoulder, but please do not enter the property. Besides, given its size, the view of the flag against the western mountains is much better from the street anyway. Roy flies the big flag on holidays, but only when the wind is light, to keep his 45-year old piece of American military history from ripping to shreds.