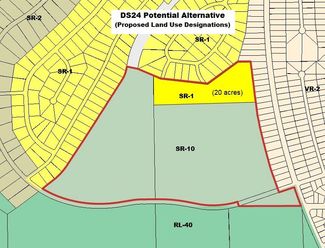 The 170-acre Rudyville (aka DS-24) property is outlined in red. Rudyville's original Property Specific Request is to rezone the entire 170 acres from one house per ten acres to one house per one acre. The CEQA-required Alternative shown in the map would only rezone the 20 acres shown in yellow.

Rudyville (aka DS-24) is one of 41 active Property Specific Requests (PSRs) in San Diego County, each seeking approval from the County Board of Supervisors for proposed Amendments to the County's General Plan. Most of the PSRs (including DS-24) seek increased housing density. In the case of Rudyville the request is to change the current General Plan designation of the entire 170-acre property from one house per 10 acres (SR-10) to one house per one acre (SR-1). A public hearing in Borrego Springs on April 7, 2016 convened by the Community Sponsor Group demonstrated broad and deep community opposition to the Rudyville Property Specific Request. No one in the overflow crowd of more than 160 citizens spoke in favor of the requested zoning change.

As a part of the process of evaluating any request to amend San Diego County's General Plan, staff members from the Department of Planning and Development Services (PDS) are required by the California Environmental Quality Act (CEQA) to prepare a Subsequent Environmental Impact Report (SEIR) for all PSRs, including Rudyville. These county staff members, who were present at the April 2016 public hearing in Borrego Springs, have incorporated community feedback into their General Plan policy review, and the community feedback will also be reflected in the draft SEIR.

CEQA requires SEIRs evaluate a range of alternatives to the original PSR that would avoid or substantially lessen significant environmental effects of the original request. To accomplish this CEQA requirement, county staff has prepared such an Alternative for DS-24 that would re-designate only the 20 northeastern-most acres of Rudyville to SR-1 and leave the zoning for the remainder of Rudyville unchanged at SR-10 (See Map 1). This 20-acre Alternative was deemed to be less environmentally impactful because it is largely on top of the relic sand dune that runs through Rudyville and thus is mostly outside the 100-year flood plain (See Map 2). This Alternative is considered to be in "draft" form at this point in the process, and it is not a PDS staff recommendation for DS-24.

County staff anticipates finalizing all the Alternatives for each of the 41 PSRs, including Rudyville, by March 2017, allowing them to have the draft SEIR ready for public review/comment later in the spring of 2017. County staff will make known their formal recommendations on each of the PSRs in late summer or early fall of 2017.

Once finalized, the draft SEIR will represent "new information" in the amendment process; and, as such, it will be subject to public review. The Borrego Springs Community Sponsor Group will have the option of holding another public meeting on Rudyville to consider and comment on this new information. It will also have another opportunity to pass an official recommendation on DS-24. Due to abstentions at the April 2016 hearing, the Community Sponsor Group did not have the required quorum to pass an official recommendation.

Public hearings at the county level on all the PSRs will begin with hearings before the County Planning Commission in the fall of 2017. The County Board of Supervisors appoints the seven members of this Commission. These hearings will be held at the County Operations Conference Center at 5520 Overland Avenue in San Diego. The date and time have not yet been determined. 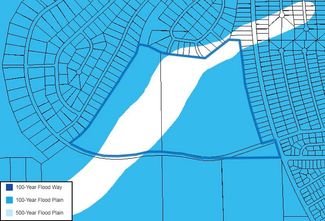 The 170-acre Rudyville property is outlined in dark blue. The white section running through the middle of Rudyville follows the general location of the relic sand dune, which is mostly above the 100-year Flood Plain.

The County Board of Supervisors, which will have the final word on these requests for amendments to the General Plan, is expected to take up the matter at the end of 2017. The Board of Supervisors will be provided information and recommendations from Community Planning Groups, Community Sponsor Groups, PDS staff, as well as from the County Planning Commission; however, individual supervisors are not constrained by any of these recommendations and are free to vote as they wish.

The public will have opportunity to provide further comment on Rudyville at the public hearings that will be scheduled in 2017. In the meantime, members of the public are welcome to contact Kevin Johnston, Land Use/Environmental Planner in the Department of Planning and Development Services, with comments or questions. He may be reached at kevin.johnston@sdcounty.ca.gov or (858) 694-3084.