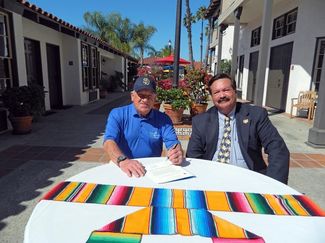 The Randy Jones Golf Invitational, founded by the former San Diego Padres pitcher to raise money for local charity golf tournaments, and Pacific Hospitality Group, Inc. (PHG), which develops and manages hotel and resort properties throughout San Diego County, announced the beginning of a program that could potentially increase fundraising for hundreds of charities countywide.

As part of the agreement, all PHG entities – including Hacienda Hotel Old Town, Old Town Tequila Factory, Warner Springs Ranch Resort and Salt Creek Golf Club – will be premier sponsors of the popular annual event, which raises money for a full gamut of charities and rewards the best amateur foursome in San Diego.

"With a goal of involving as many local charities as possible, the Randy Jones Invitational is unique in that it encourages the top teams from other charity golf tournaments to compete and raise money for their respective causes," said Pacific Hospitality Group, Inc. President Fred Grand. "Over the years, our principals have been associated with some of the world's top golf resorts, and we are thrilled to partner with Randy Jones and this most worthy fundraiser."

Since its inception in 2014, the Randy Jones Invitational has hosted thousands of golfers representing more than 200 charities. This year, the Invitational's semifinals for 1,440 golfers (360 teams) will be held January 9-26, 2017 at Woods Valley Golf Club, and the finals will be held February 18 and 19, 2017 at Rancho Bernardo Golf Resort.