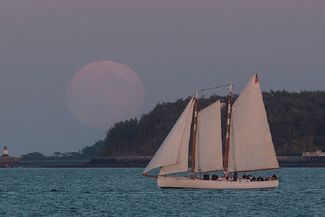 'Don't make the mistake of photographing the moon by itself with no reference to anything,' he said. 'I've certainly done it myself, but everyone will get that shot. 'Instead, think of how to make the image creative-that means tying it into some land-based object. 'It can be a local landmark or anything to give your photo a sense of place.'

Is it hopeless to attempt a supermoon image with a smartphone camera? Ingalls says, it's all relative. 'For me, it would be maddening and frustrating - yet it may be a good challenge, actually. You're not going to get a giant moon in your shot, but you can do something more panoramic, including some foreground that's interesting.

'Think about being in an urban area where it's a little bit brighter.'

To get the right light balance of the moon on newer iPhones and other smartphones, 'Tap the screen and hold your finger on the object (in this case, the moon) to lock the focus.

'Then slide your finger up or down to darken or lighten the exposure.'

For digital SLR photography, Ingalls uses the daylight white balance setting for capturing moonlight, since sunlight is being reflected.