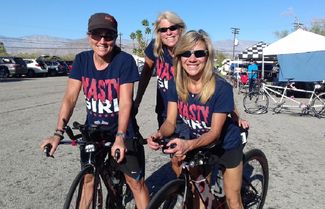 Made up of two riders and one crew member, the Nasty Grrls came together for the first time to race as a relay team in the World Time Trial Championships. Lisa Bliss from Ellensburg, Washington, and part time de Anza resident Sylvia Maas, took it in turns to race a lap each during the 24-hour race.

Usually seen competing as solo riders, they have come together to battle head winds, fatigue and temperatures over 90°F during the midday sun. "It's nice to be in this weather but as it's a flat course," explained Bliss, "there is the chance we could fight strong winds."

"Last year the temperatures dropped to 32°F during the night," said Maas, who swaps her time between San Diego and Borrego, "when it gets cold, the riders find it hard to regulate their temperatures".

Keeping a sense of humor and the drive to keep going is made possible with the aid of their support crew, San Diego resident, Kristi Sisson. "I swap the timers with every lap, give the girls massages and keep telling them jokes." said Sisson. "I also pack the tooth brushes and tooth paste." Although the team are lighthearted and there is a strong sense of camaraderie and obvious enjoyment attached to the grueling challenge the women are serious about achieving their 400-mile goal.

Before the start line I caught up with the team around their campsite in the make shift village set up by the organisers, Race Across America (RAAM). The excitement bubbles about you as you walk around, the slight nervous tension hidden behind the friendships and family atmosphere of the event. Cars and tents house the riders, some of whom have been in Borrego for two weeks training already, the Nasty Grrls are sat on lawn chairs chatting to another competitor's crew and it's hard to believe that the start is almost on them and the next 24-hours will be a mental and physical battle many of us could barely imagine under taking.

A lot of competitors drop out of the race through whatever reason and there is caution in the ladies voices as they discuss the course but it soon turns back to excitement "We've been up since 6:00 a.m., not sure how it will go but you can't get better cycling then in Borrego" says Maas "we've been out cycling this morning and it's great that there are no stop lights to worry about. "

"Trump called Hillary a nasty woman in the last debate" explains Bliss, "so we decided to call ourselves Nasty Grrls as an ode to Hillary Clinton. We're having fun with it. We aim to have fun and finish fast." "And we have a lime green ironing board" states Sisson, "how many teams can say that?" 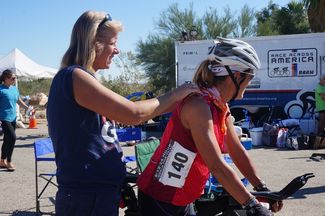 Maas rode in the race last year as well as living in de Anza and knows that despite the organizers best efforts, some residents of Borrego still see the racers as an unwanted addition to the town. When I asked her about the last-minute objections sent in to the County regarding the event, she wasn't surprised. "There are a small handful of people that don't like it. Last year we had two pickup drivers driving backwards and forwards honking their horns at competitors. It's unnecessary. I've been coming here for twenty-five years and I've seen how stores open and close fast in this town. The racers bring a lot of commerce. We've eaten at Keslings while we've been here and we use the supermarket."

"I have an appointment with a realtor a few hours after the race," says Bliss, "I'm looking to buy a condo here."

Final results for the team showed them come in at a very impressive seventeenth place out of seventy riders covering 428.4-miles.