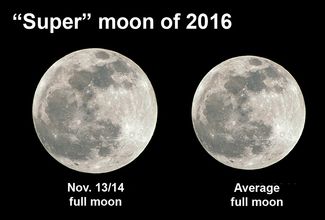 Imagine that you stopped at your favorite Italian restaurant and ordered a 14-inch pizza. Now, suppose they brought you a 16-inch pizza by mistake. Think you would notice the difference immediately? If so, would you call the larger one a "super" pizza?

I'm guessing the answer to both questions is no. That's because there's only a 7 percent difference in size between the two. And even if you did, it's hardly worth getting excited about.

So what does all this have to do with the heavens? Well, you'll find out soon enough. But in the meantime, let's talk about the full moon coming up on Sunday night and Monday morning.

Experienced sky watchers and regular readers of this column already know that a full moon that appears near the horizon always seems to be much larger than normal. This is not real but rather an optical trick known as the "moon illusion."

Look at the moon again when it lies high overhead and you'll see that it appears to have shrunk. Of course, it hasn't; it's just that when it appears high in the sky there are no terrestrial objects in the foreground to help our brains create the illusion, and the moon appears smaller (normal) in size.

Now, go out at dusk on Sunday, Nov. 13, and check out the full moon rising. Or go out at dawn on Monday, Nov. 14, to see it setting in the west. At those times, the full moon will appear larger because of the moon illusion, and it will actually be larger.

Wait a minute. How can this be? The moon is a solid hunk of rock; its actual size can't change. True, but its apparent size can change. This effect occurs because the moon doesn't orbit the Earth along a circular path. It moves instead along an ellipse that at times carries it closer to us, and at times carries it farther from us, during its monthly cycle.

Fortunately, this change in distance isn't much because without the moon's relatively constant gravitational pull the tides might have never made it possible for life to emerge from the seas eons ago.

Astronomers who accurately measure the moon's distance tell us that this is constantly changing. And when we see the full moon setting in the west at dawn on Monday, Nov. 14, it will lie very near its perigee (its nearest orbital point to the Earth), only 221,800 miles away. That's 17,556 miles, or a little more than 7 percent larger than it is at its average distance.

This perigee, of course, occurs every month. But when it happens around the time of a full moon you will frequently hear the media call it a "super moon." There's nothing super about it, really; at those times it appears only 7 percent larger than the average full moon -- about the size difference between a 14-inch pizza and a 16-inch pizza.

So there you have it. The super moon isn't really all that super, but that doesn't mean you shouldn't head outdoors to check it out!

In the meantime, anyone up for a pizza?