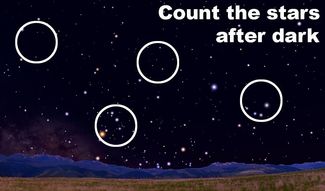 How many stars are there in the universe? No one knows, of course, but Dr. Carl Sagan, on his popular 1980s television mini-series "Cosmos," said that there are "more stars in the universe than there are grains of sand on all the beaches on Earth."

Estimating the number of stars is much easier than estimating the number of grains of sand, but several people have done it. For example, Dr. Jason Marshall, aka the Math Dude, estimates that there are about 700 trillion cubic meters of beach on Earth, and that works out to around 5 billion trillion sand grains. That's a 5 followed by 21 zeroes!

So is it possible that there are more stars than that? Well, astronomers estimate that there are about 200 billion stars in our own Milky Way galaxy. Since we've always believed that our universe is populated by a hundred billion or so galaxies, we can conclude that there would be four times as many stars than grains of sand -- 20 billion trillion (that's a 2 followed by 22 zeroes).

As impressive as this number may sound, it could be rather low. In just the past few weeks, astronomers have announced that their estimate of the number of galaxies in the universe appears to be too small by a factor of 10.

That means there could be as many as a trillion galaxies in the universe and, contained within them, a total of some 200 billion trillion stars -- that's a 2 followed by 23 zeroes!

Of course, this is all just a guess. But it is based on what we can observe and measure.

So how many of those stars can we see with our own eyes on a clear dark night? Most stargazers would say they can see billions, but this, too, is just a guess. So why don't you count them?

Before you call the authorities to have me committed, try it yourself the next time you're under a clear, dark sky. It really isn't all that difficult or time-consuming; the only tools you'll need are a cardboard tube from a roll of toilet tissue, a pen, a notepad and, perhaps, a calculator.

Place the tube up to your eye, and aim it skyward. Holding it still, count the stars you see within, and record that number on the notepad. Do the same for seven other random spots scattered around the sky. When you're finished, add those eight numbers together and multiply the sum by 10.

That's it. That's the approximate number of stars you can see with your eye from that location on that night. Surprised?

If you believed you could see billions of stars, you're going to be in for quite a shock because on even the clearest and darkest of nights, the very best eyes can see at most only two or three thousand stars. Yes, folks. There really is quite an amazingly immense universe out there, most of which is far beyond our ability to perceive and comprehend.