Our Rams Pluck the Eagles 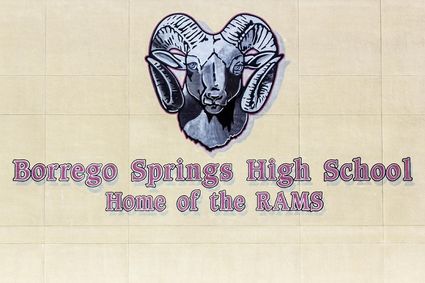 An exclusive to the Borrego Sun

After a long and hard 3 weeks on the road, our Rams returned home and beat their up-the-rivals, the Julian Eagles.

Both teams went 4 and out on their first possessions. Eagle RB Nino Romano fumbled the rock after a 20 yard pickup and the Rams defense scooped it up at Borrego's 43.

Ram Alexsys Padilla picked up 1 yard on a quick pass from QB Jesus Ornelas, which was followed up by a quick hand off to Andrew Morris, reversing to Alex Morris, who then threw a perfect spiral to a wide-open Jesus at the Eagles 27. Andrew took the ball the rest of the way for the first Rams TD of the night. Juan Carmona's PAT split the uprights.

On the following kick-off, Eagle Jose Ramirez found a seam down the far sideline and returned the ball for an 89 yard touchdown. The Eagles 2-point conversion was good.

Our Rams closed out the 1st Quarter with a failed field goal attempt.

My Rams were on the move again when Alex Morris fumbled on a 20 yard rush. The Eagles recovered. After a 10 play series, the Eagles scored on a 8 yard run by Ozzie Martinez. Their 2-point conversion was good.

Our Rams went 4 and out on their first possession of the 2nd half. Julian followed with a 4 and out, too. Alex Morris took Julian's punt at Borrego's 35 and streaked down the sidelines, getting tackled at the Julian 3. Juan Ornelas waltzed in for the Rams score. The 2-point conversion failed.

Alex Morris picked off a certain Eagle TD pass at the Rams goal line and returned the ball to the Rams 23 as time ran out on the 3rd Quarter.

Opening the final quarter, Alex and Andrew combined for 21 yards. Ornelas took the 2nd down snap and handed of to Andrew who reversed to Alexsys who found Jesus open at the Eagles 39. Andrew, Justin Lopez and Jesus made quick work of the last 39 yards and our Rams made the last touchdown of the night. Juan's PAT was batted down at the line of scrimmage.

Next week is Homecoming and our Rams are taking on the San Pasqual Academy Dragons. We will see you there.