Just days after a cluster of more than 200 small earthquakes shook the Salton Sea area, scientists have found evidence of a second fault line that runs parallel to the massive San Andreas Fault - one of the state's most dangerous fault lines.

The new fault appears to run right through the 56-km-long Salton Sea in the Colorado Desert, to the west of the San Andreas Fault. The discovery will force seismologists to reassess earthquake risk models for the greater Los Angeles area.

"This previously unidentified fault represents a new hazard to the region and holds significant implications for fault models ... and, consequently, models of ground-motion prediction and southern San Andreas Fault rupture scenarios," the team from the Scripps Institution of Oceanography and the Nevada Seismological Laboratory reports.

Now known as the Salton Trough Fault, the newly mapped fault has been hidden for all this time because it's submerged beneath the Salton Sea. 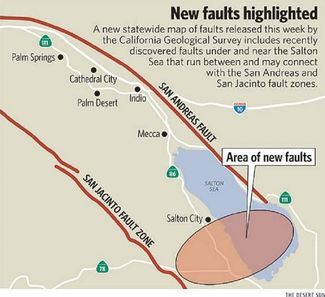 Using an array of instruments, including multi-channel seismic data, ocean-bottom seismometers, and a surveying method called light detection and ranging (LiDAR), the team precisely mapped the fault inside several sediment layers both in and surrounding the lakebed.

"The location of the fault in the eastern Salton Sea has made imaging it difficult, and there is no associated small seismic events, which is why the fault was not detected earlier," says Scripps geologist Neal Driscoll.

Oddly enough, the fact that we now know there's an extra fault line running parallel to the San Andreas Fault doesn't necessarily mean the area is more prone to earthquakes than we originally thought. It might actually solve the mystery of why the region has been experiencing LESS earthquakes than expected.