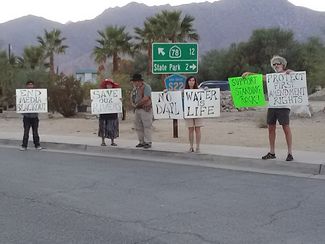 Over the Columbus Day weekend, several protesters came out at Christmas Circle to protest the North Dakota oil pipeline. There were signs such as Support Standing Rock and Protect First Amendment Rights held by some local Borregans.

As you might recall, earlier in September of this year, many members of the local Torres Martinez Desert Cahuilla Indian Reservation (near the Salton Sea) helped the Standing Rock Sioux tribe of North Dakota protest against the pipeline by delivering donated goods and sharing their concerns of water contamination within the pipeline area. 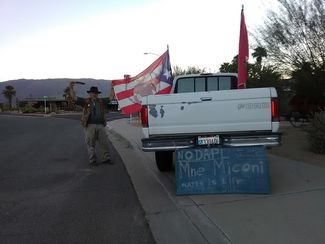 The vice-chairwoman of the Torres Martinez Desert Cahuilla Indians, Desiree Franco, visited North Dakota on September 10th to support the Standing Rock Sioux tribe. Local water contamination and water issues are also important to the local Torres Martinez Desert Cahuilla Indians as well and they have united with the Sioux North Dakota tribe on the importance of water.

The Dakota Oil Access Pipeline is a proposed 1,172 mile line slated to carry crude oil from North Dakota to southern Illinois when it is completed by the end of this year.

The source of the drinking water for the Standing Rock Sioux Tribes will be crossed multiple times by the pipeline and they are concerned about possible contamination of the water and also the pipeline could come close to ancient burial sites.

The protests are becoming "heated" as bulldozers are continuing the pipeline. The issue is of major concern and brings tribes together even as far south as Borrego Springs.