Pints for Parks at Borrego Outfitters 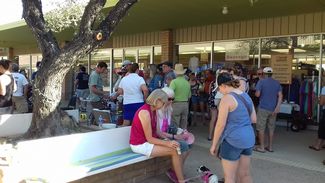 The event ended up as a popular additional attraction

Borrego Outfitters hosted 'Pints for the Park' this weekend to benefit the Anza-Borrego Foundation as they celebrate their 50th Anniversary.

Despite initial concerns regarding the event being hosted on the same day as Borrego Days, Paige Rogowski, Executive Director of ABF, was quick to dispel any objections. "The event is two hours long" she stated "the beer garden at the circle goes on all day. Hopefully this enhances Borrego Days and brings people to the businesses all year round."

Funds raised will allow urgent repairs to be carried out, purchase supplies, Interactive support at the visitors center and strengthen coffers in order to acquire land to grow the park.

The event had hoped to draw in 20 to 30 people but it seems word had got round and not only were there a lot of new faces but a large group of pilots and residents from the Borrego Air Ranch were there to support the cause and had brought along a few guests as well. In fact there were so many willing pint drinkers that despite Nickle Brewery providing two kegs to sample, the ABF were running low and approached Kesling's who agreed to sell the fundraiser a keg of Nickle beer from the bar.

Borrego Outfitters had a busy day in the shop running a raffle and selling the stainless steel mugs they donated to the cause. The end total was 150 'Pints for the Park' being consumed with all proceeds benefiting the ABF. 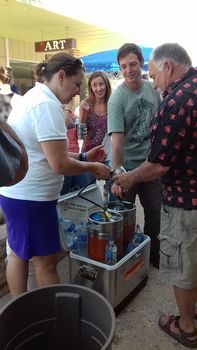