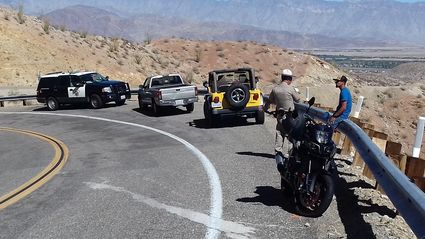 Officer Chell talking to resident and the riders bike in the foreground. No other vehicles or persons pictured were involved in the collision.

A 55 yr old male from Redlands has been involved in a minor traffic collision while riding up Montezuma Grade, leaving Borrego Springs.

The motorcyclist was travelling in a large group of riders from Southern California when the incident occurred this morning.

Officer Mike Chell, Borrego Resident Post Officer out of El Cajon, states "The rider entered the curve, crossed the yellow lines and struck the left side of an oncoming white 2010 Toyota Yaris."

The rider was complaining of left shoulder and rib pain and was transferred from the scene by 7991 medic unit to Palomar Hospital. No DUI is suspected.

The couple in the Toyota are down from Ranchita for a day trip and sustained no injuries. Officer Chell states the Toyota driver "saw the group of bikers and said 'I bet one of them is going to hit me', sure enough, he called it."

The corners of the Grade are notorious for biking accidents and no doubt it wont be the last one of the winter season as the town sees traffic increasing over the next few months.

A resident following behind the accident has been down the side of the hill attempting to locate the bikers GoPro camera.

All lanes are open to traffic.

A motorcycle has crashed coming down Montezuma Grade this morning. Emergency service have arrived on scene.

More information to follow on the condition of the rider and any road closures.