All the Fun of the Pageant 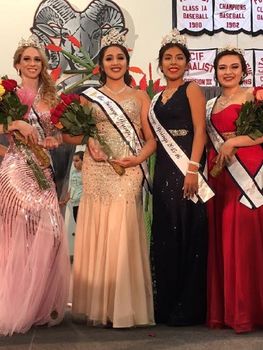 The stars were aligned for Borrego Springs High School senior Michelle Delgadillo, when she was crowned Miss Borrego 2016 – 2017 at the Resort to Nature Pageant on Oct 15.

Delgadillo, the daughter of Marco and Sandra Delgadillo, rose to the top of the judges' favor during a competitive pageant amongst seven beautiful contestants. Delgadillo is currently a part of the Interact Club, ABS president and Soroptimist Woman's Organization. She plans to attend Cal State San Marcos next year, or a college in San Diego, pursuing a career in sports medicine. The contestants also voted Michelle Delgadillo as Miss Congeniality for 2016 – 2017.

First Princess was awarded to Jessica Gucwa, daughter of Rodger and Carol Gucwa. She is a part of the community service at the high school and volunteers her time at Girl Scout meetings. Gucwa plans on attending a community college to do her general education before transferring to San Marcos University in the hope of becoming a Paediatric Nurse.

Noemey Ochoa, daughter of Israel and Carmen Ochoa, was named Second Princess. She is currently involved in the Borrego Springs Soroptimist Woman's Organization. Her plans for next year include getting her certificate as a medical assistant at a community college; while she works on her general education. Once she has her associates degree, she plans on transferring to a four-year University to major in Health Care Management.

Judges for the evenings event included Sarah Rogers, Deanna Townsend and Mary Trimmins. Although their job was not easy, they chose a candidate based on their personal interviews, casual dress, individual speeches, formal wear, poise and personality.

Princesses and Courts from Ramona, Julian and Lakeside were also in attendance; alongside their coordinator, Jill Flemming. Flemming states that "We all attend each other's pageants. The girls love supporting one another and learn valuable life lessons and gain lasting friendships." 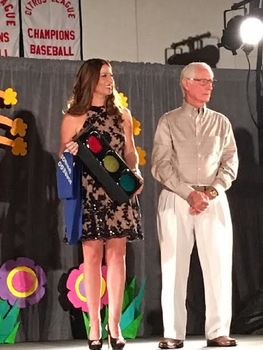 The local pageant was coordinated by Miss Borrego of 1988 and exiting Honorary Mayor, Sylvana Meeks. Meeks had the privilege of handing over the ceremonial 'Traffic Light' to the newly elected Honorary Mayor, Jim Wilson, who stated, "If you promise to stop at every stop sign and yield at every yield, you will earn one more year of not having a traffic light in our community." Wilson goes on to state that he is proud to be the next representative of Borrego Springs. According to Wilson, Borrego is amazing because it has "More volunteers and contributors than any other California town with a population of about 3,000 people. I'm so honored and proud to be a part of it. It's rewarding and I thank you."

Also honored at the event was the late Frank Himmerich, Volunteer of the Year 2016 and Dan Wright, the Lifetime Achievement Award Winner for 2016.

The outgoing 2015 – 2016 Miss Borrego Springs Nadia Lopez, crowned Michelle Delgadillo in the final moments of the nearly two-hour pageant. In her farewell speech, Lopez commented that she had grown to be more confident during her year as Miss Borrego and would always take the lessons Borrego had taught her wherever she goes.

A special thanks goes out to Leslie Duncan and the third-and-fourth Grade students for designing the stage, as well as Kathy King who was the score tabulator.