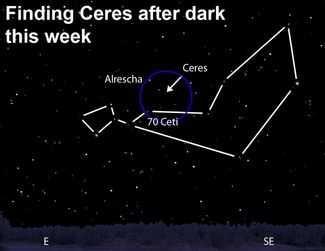 It was on the first day of the 19th century that the Italian priest, mathematician and astronomer Giuseppe Piazzi found a strange object in the sky that no one had ever seen before -- an "intruder" among the familiar stars of the constellation Taurus, the bull. After waiting several nights, he returned to the telescope and found that the object had moved.

Piazzi named the new body "Ceres" after the Roman goddess of agriculture and protector of Sicily. But what he had found was a total mystery. At first, Piazzi thought he had discovered a comet. Then astronomers suspected it might actually be a planet. It wasn't until the 1850s, however, that they found similar bodies between the orbits of Mars and Jupiter and classified them all as asteroids.

Ceres, with a diameter of only 587 miles, was recently reclassified as a dwarf planet -- along with our friend Pluto -- and even received a visitor in the form of a robotic spacecraft named Dawn, which entered orbit around the small body and radioed back remarkable photos and other data to scientists on Earth.

This week, Ceres reaches its opposition point in its orbit around the sun, rising in the east as the sun sets in the west. It now appears just under the limit of naked-eye visibility -- about 2 1/2 times dimmer than the faintest stars we can see -- but it's well within the range of binoculars.

To search for Ceres, head outdoors this week around 9 or 10 p.m. and find the constellation Cetus, the whale, low in the southeastern sky.

Cetus is said to be the beast that Poseidon sent to plague the king Cepheus when the queen Cassiopeia claimed to rival the Nereids in beauty. Cetus was placed in the heavens to commemorate his heroic deed. With a bit of imagination, one might almost be able to trace the whale's huge body, and its tail and fluke stretching toward the east.

Once you find Cetus (use the accompanying illustration to help you do so), identify the faint stars named Alrescha and 70 Ceti. They are the keys to locating Ceres this week.

If you aim your binoculars toward these stars, placing Alrescha at the top left of your field of view and 70 Ceti at the bottom left, Ceres will appear very near the center.

Because Ceres moves around the sun, its orbital motion is detectable as it drifts among the stars from night to night. So check it out the next night, and the next. You can even make a sketch of the binocular starfield for later comparison. This works best if you can mount your binoculars on a tripod.

If you want a more detailed map of that part of the sky and wish to plot Ceres' position on any night you choose, visit in-the-sky.org/findercharts.php. There you'll be able to enter Ceres' name, your location, date and time and print out any kind of map you like.

If the star you thought was Ceres has indeed moved, you've found it. And my guess is you'll be just as excited as Piazzi must have been 215 years ago!