Quartzsite police are looking for a transient it believes, could be residing in the Salton Sea area. 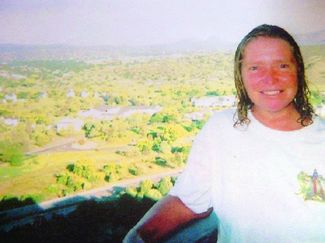 The Quartzsite Police Department is seeking the public's assistance in locating a 65-year-old woman who was last seen in Quartzsite approximately two years ago and is believed to be in the Salton Sea area.

Lt. Mike Ewald said that a concerned family member reported 65-year-old Marie Brodine missing, saying she hadn't been seen since some time in 2014, and asked Quartzsite police to look into her whereabouts.

According to Ewald, the last time law enforcement had any contact with Brodine was in 2013 when a trooper with the Arizona Department of Public Safety reported she seen was walking on Interstate 40 near mile maker 9, which is just outside of Kingman.

"Due to the length of time her family has had no contact with her they are worried, and so are we," Ewald said.

Brodine's family informed Quartzsite police, that she suffers from schizophrenia and may have become disoriented.

Ewald said while police have no reason to believe anything bad has happened to Brodine.

Brodine, whose hair may be blonde or grey, has been listed in the federal databases as missing/endangered person.