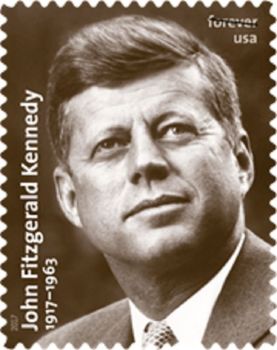 The Postal Service will commemorate John F. Kennedy's 100th birthday with a Forever stamp next year.

The stamp commemorates the 100th anniversary of the birth of John Fitzgerald Kennedy (1917-1963), 35th president of the United States. Kennedy was the nation's first Catholic president and, at age 43, the youngest person ever elected to the nation's highest office.

The stamp art features a photograph of Kennedy taken by Ted Spiegel in 1960. Kennedy remains for many a captivating and charismatic personality - one who appealed to the nation's higher ideals and inspired young Americans to engage in public service. Art director Derry Noyes designed the stamp.