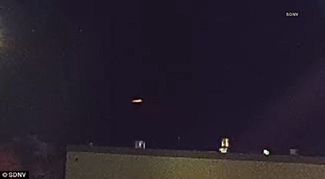 Mystery surrounds a 'fireball' seen over San Diego Mon. Aug 15, as witnesses report sightings from Eastlake, above the City Heights area, and another person noticed them above the San Diego International Airport.

NASA experts and Palomar Observatory spokesman Steve Flanders dodn't think the lights were related to a meteor, explaining, 'The tail looks like the flames that escape from a rocket engine during ascent'.

A US Navy spokesperson reports that the USS Makin Island group is training, but there weren't any 'live fire' exercises when the lights were reported.

The Russians and Chinese are currently suspiciously silent on the matter.