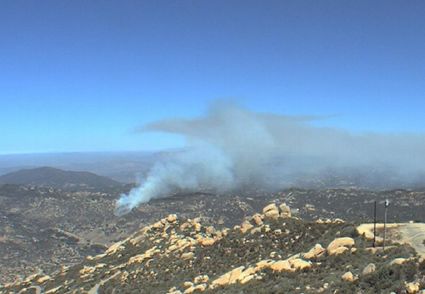 The Lyons Fire, is reported to be 60% contained after 100 firefighters and half a dozen firefighting aircraft, worked aggressively to beat back the bush fire on Lyons Creek Lane.

Homes had been under threat from flames towering 30 to 40 feet in the air, according to residents as Cal Fire officials stated structures along Skyline Truck Trail were also being protected.

Shawn Rhoads, aresident of the area jumped in his vehicle and drove up to see the progress of the fire just after the first helicopters passed overhead, and said, the flames "were huge, over 30-40 feet high and really blowing up the canyon. The wind was just blowing it up the side of the mountain."

The rapid response from fire teams had stopped the fire's spread in about an hour and 20 minutes.