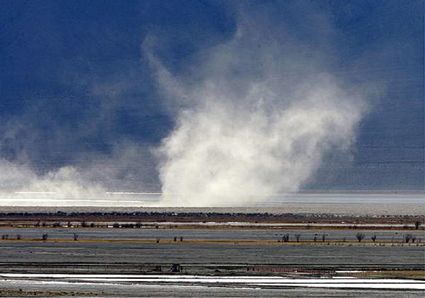 The Imperial County Board of Supervisors have authorized the Imperial County Executive Officer Ralph Cordova Jr., to release guidelines for a Solicitation of Interest for Dust Suppression Projects at the Salton Sea.

Following the creation of the Salton Sea restoration goals that were established in October 2015, the State of California's administration are looking for assistance from interested parties, that are consistent with the Salton Sea Air Quality Mitigation (SS AQM) Program. Statements of Interest must be submitted by August 31, 2016.

"The County of Imperial, in collaboration with the Imperial Irrigation District, is leading the conversation in relation to the Salton Sea in an effort to move this topic to the forefront with our state and federal administration and legislature," stated District 4 Supervisor Ryan E. Kelley. "During these discussions, we recognized that there are private properties along the Sea that should be and can be a part of the solutions to address the impending environmental and public health hazards posed by the receding shoreline. By releasing the Solicitation of Interest, we can tap into the creative minds of Imperial Valley landowners and local entrepreneurs who are willing to test new dust suppression methods that can be adopted and applied to a large surface area, such as the Sea's exposed playa."

The County of Imperial is soliciting Statements of Interest that will present test projects that can be implemented in the short term and that provide demonstrated results to control dust emissions at the Salton Sea. According to the solicitation guidelines, the Statements of Interest shall not be more than three pages, all applicants must demonstrate ownership of property identified at or near the Salton Sea, and the proposed project must meet the goal of achieving dust suppression that is consistent with the SS AQM Program.