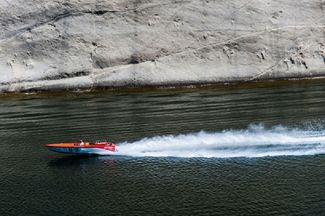 The Salton City 500 was billed as the Indianapolis 500 of endurance boat racing, and it was a sledgehammer on boats. John Fell, current owner and restorer of Cream Puff, which was built in 1961 for the unlimited class of inland lakes marathon racing, says "Can you imagine trying to drive one of these things for 500 miles-you'd be peeing blood for a week!"

Popular in California in the 1950s and 1960s, inland lakes marathon racing was happening at Salton Sea, Parker Dam in Arizona, Clear Lake above Santa Rosa, California, and Lake Berryessa located between Santa Rosa and Sacramento in northern California and attracted all the speed crazies, as well as an estimated 50,000 spectators.

"It was the 1960s, people were nuts back then." said Fell. 189 boats entered the race in 1964, but incredibly only seven finished after over seven hours of running the four-mile course. Blown engines, damaged hulls, fried V-drives, and an infinite amount of mishaps were common.

Rudy Ramos was the "son" part of Rayson-Craft, along with his father Raymond. But Rudy's pleasure was racing in marathon boat races, and after winning the 1961 Salton City 500 with an 18-foot Rayson-Craft flat bottom powered by a Keith Black 392ci Chrysler Hemi, with co-driver and money buddy Ed Olson, he knew bigger was better when it came to marathons.

Problems plagued Cream Puff during its early gestation through 1963, because of its habit of wandering on the water. Over two years Ramos experimented to find fixes, and once the demons were worked out, Cream Puff dominated the water. The boat easily won the 1964 Lake Berryessa Six-Hour marathon in April, running 10mph faster than the competition, and at half-throttle.

When the Salton City 500 with its $6600 first-place purse came around Veterans Day weekend 1964, Ramos was 20mph faster than the competition and finished 1-1/2-hours ahead of the second-place finisher.

When Fell was looking for a boat to restore, he came across the legendary Cream Puff. "When I found it, it was lying on the ground painted powder blue with a rattle can, and swarms of mosquitos flying around from standing water inside. It was horrific. When I brought it home my wife screamed, 'You have STUPID stamped on your forehead!'"

Now the boat is used by the family at weekends and will soon be looking for a new owner as Fell looks for his next project and Cream Puff enjoys its second chance at life.