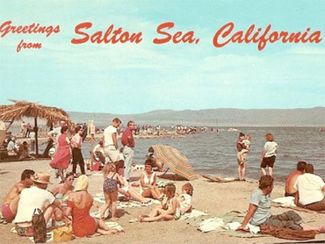 As residents and environmentalists begin to lose patience with the lack of action from state officials and regulators, AirTalk spoke to two experts to find out the consequences of inaction for the Salton Sea, and how the state is trying to avoid the ecological disaster in the Imperial and Coachella Valleys.

Timothy Bradley is the director of the Salton Sea Initiative at UC, Irvine. He emphasized that if the Salton Sea dries up, the biological and public health consequences for Southern California will be dire.

WHAT WOULD HAPPEN IF THE Salton Sea WAS ALLOWED TO DRY UP?

Timothy Bradley: There would be two consequences. One is biological. The Salton Sea is the most important feeding ground on the Pacific Flyway for many many species of birds. Although it is only 100 years old, previously those birds fed in the marshes in the Central Valley, which are now gone. Or, marshes along the coast, which have been developed, or at the delta of the Colorado river, which is now completely dry.

There's another problem in addition to the biological ones, and that's public health. If the Salton Sea should dry up, and even if it begins to dry down, there will be beaches along the shore which will be the source of toxic dust. This is an immediate problem for those who live in that area and California [as a whole].

It's toxic because of the material that's associated with the dust, which includes heavy metals, agricultural chemicals, and of course the salt. These tiny dust particles, carry these toxic particles deep into the lungs, and it's well recognized that this dust is going to be a very serious problem for that part of California.

In January of 2018, the Quantitative Settlement Agreement, which is a contract to remove water from the Imperial Valley and carry it to coastal regions, will lead to the sea declining much more rapidly. So that's a critical deadline that we need to be conscious of. That's just a year and a half away that a very serious public health and environmental problem is going to be exacerbated in Southern California.

Bruce Wilcox is the Assistant Secretary at the California Natural Resources Agency, and he is the point person for Salton Sea policy for the state. He said the state has short-term fixes in the works, but they are still working on a comprehensive plan to protect the future of the lake.

Bruce Wilcox: Our plan is to start building habitat around the edges of the sea in an incremental manner that will provide stable habitat for the fish and the birds moving forward using agriculture return flow water. That plan is probably a 5 to 10 to 15 year plan. We can continue to build that habitat for that length of time. There also is a perimeter lake plan that's finalized in that.

The longer term plan hasn't finalized yet, but the plan is to have a draft done by the end of this year. That draft will outline what we think we need to do at the Salton Sea.

TB: The State needs to recognize the urgency of this. For example, we don't have good data about what's going on [the lake's tilapia population] ... Cal Fish and Game could be providing this information. With regard to the dust problems, Cal EPA needs to be involved ... Think about hundreds of thousands of people in the Coachella and the Imperial Valleys whose public health is at risk. [Bruce Wilcox] is doing a great job, [but] the entire state apparatus needs to really realize that this is a very serious problem that needs to be addressed.

HOW WILL CALIFORNIA PAY FOR THIS?

BW: At the state level, the legislature has recognized the problem and is moving forward. One of the issues we have is that there are so many well deserving projects across the state of California that need funding and money, that the funding doesn't go as far as it should.

One of the tasks that the [Salton Sea Task Force] gave us is develop a funding plan to pull these projects all together. One of the components of that is dealing with the federal government and seeing where we can find additional funding. Maybe there is private sector funding available. The Salton Sea Authority is an example. It's looked into an incremental financing district that might be able to help fund restoration or management at the Salton Sea.

HOW MUCH WILL IT COST?

TB: The price of this is going to be in the billions of dollars, no matter what we do. There's been a study by Michael Cohen that if nothing's done the cost to California would be $40 billion. So, the 3 or 4 billion that we're going to spend there is money well spend.

The $40 billion is the cost of doing nothing -- that would be the environmental costs, the public health costs, the economic costs to land values. It's a huge huge burden. By stepping in the state can actually save a great deal of money and help the state out.