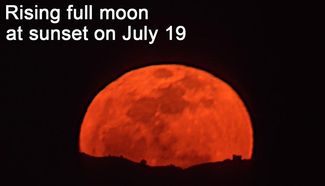 There are few things in nature I enjoy more than watching a massive full moon rising over the horizon. This is truly a treat everyone should experience at least once, and when you do you'll surely raise the same question as every other moon gazer: "Why does the moon appear so large when it's rising, and smaller when overhead?"

A simple question without a simple answer.

Many believe the Earth's atmosphere somehow acts like a lens and magnifies the moon's appearance, but this is just as wrong now as it was when Ptolemy suggested it 20 centuries ago. More likely is that it's related to how we humans have evolved to perceive rigid objects appearing near the horizon.

Whatever the cause, try estimating the moon's size the last time you saw it rising in the east and compare it to a familiar object -- say, your hand. For example, hold your little finger at arm's length and it will subtend to your eye an approximate angle of one degree; your fist also at arm's length will appear about 10 degrees across.

Unless you know the answer in advance, it's amazing just how far off your guess will be. This is partly because memory of such things is not reliable, but mostly because you're trying to "measure" something that isn't even real. It's an optical illusion.

So how many degrees across would you estimate the full moon appeared the last time you saw it appearing over the eastern horizon? One? Ten? Twenty? The fact is that the full moon appears only one-half degree across no matter when and where you see it.

Don't believe it? Well, shortly after sunset on Tuesday, July 19, you'll have a chance to go out and measure it for yourself.

Hold your hand out at arm's length and use it to measure the moon's size. Hold up two fists, or one. Then hold up your little finger. Surprised to find that the "huge" moon fits neatly behind your little finger? You're not alone. I'm still so amazed by its apparent size that I have to measure it every time I see it. What's even more unbelievable is that it will remain the same size as it rises higher into the sky, regardless that it appears to the eye as though it's shrinking!

This phenomenon is called the "moon illusion" and really is quite stunning.

To correct the illusion, look at the "large" rising moon through a loose fist -- using your fist to block out all but the moon itself. The moon will appear to shrink, proving that the foreground somehow contributes to this bizarre sight. And for an even more startling demonstration, blink your eyes back and forth -- looking through, and then around, your loose fist.

Or, if you don't mind having your neighbors question your sanity, try this additional demonstration. Turn your back to the rising moon, bend over carefully and view it through your open legs. Now, I admit it looks the same to me (though upside down), but many report the moon appears smaller this way.

Yes, any way you look at it, it really is quite an illusion!