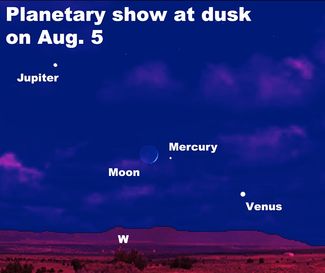 Head outside at dusk this month to photograph celestial pairings.

It's been quite a while since we've seen the planet Venus glistening in the western sky at dusk. It has spent much of the past year on the opposite side of its orbit, rising and setting before the sun, but now it's back in the evening sky, where most of us can enjoy its beauty.

If you'd like to spot Venus during early August, you'll need a very low horizon to the west-northwest and you must get outside shortly after sunset. It will lie very near the sunset point, and on August 3 the extremely thin crescent moon will appear just below it. About 30 minutes after the sun disappears below the horizon you may need binoculars to spot it, but unless the sky is very clear in that direction it will be quite difficult.

Just above Venus you may see the planet Mercury appearing as a much fainter star. The crescent moon will pass just above Mercury on the following night, and on August 5 the moon will lie very close to the bright planet Jupiter. In fact, if you live in the South Pacific you may see the moon drift in front of Jupiter as it moves along its orbit -- an occultation. Stargazers in the rest of the world, however, will see just a very close pairing of the two bodies.

Over the next few weeks you'll want to keep an eye on these four objects: Venus, Mercury, Jupiter and the moon. If you do, you'll easily see how their positions change from night to night as a result of their orbital motions combined with that of our own Earth.

As the moon swings by each planet in turn, be sure to check out these pairings with binoculars, since few celestial sights appear more three-dimensional. Of course, this is purely an illusion caused by our inability to see true depth in the cosmos, but it results in a truly pretty picture. And, speaking of pretty pictures, why not try your hand at photographing these pairings? You don't need fancy or expensive equipment -- a camera and tripod will do fine, though a zoom lens will help you produce a larger image.

This week these bodies appear low enough in the sky at dusk for you to frame the scene with a foreground subject -- a dramatic tree, building, sculpture or person, for example. If you shoot about 30 minutes after sunset you can probably trust your camera's automatic settings. If not, try setting your camera to ISO 100 or 200 and shooting 1/3 of a second or so at f-stop 8. You'll need to adjust settings as you go, however, since the light changes rapidly at dusk, so don't be afraid to experiment. Remember, with digital photography experimenting costs you nothing. In fact, my very best friend on the camera is the delete button!

Over the next few weeks, the planet Venus will become increasingly brighter and higher in the western sky at sunset, and you'll be reading more about it right here! In the meantime, enjoy the sky show, and please email me if you get some nice photos. I'd love to share in your success!