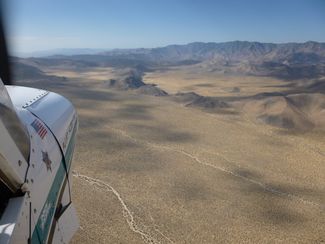 “The opportunity to see from the air some of the Earth’s most beautiful places is my biggest reward flying for the California State Parks,” stated Joshua Ertl, Ranger Pilot #1422 of the Anza-Borrego Desert State Park, Colorado Desert District.

Ranger Joshua is Borrego’s newest pilot patrolling over 650,000 acres of desert from Anza-Borrego Desert SP to Picacho SRA’s Colorado River landscape. This is the only California park that has its own aircraft and pilot; which makes it so unique.

Growing up in San Diego, Ranger Joshua would go camping with his family in Palm Canyon and always thought that the Anza-Borrego Desert is where he would find his home one day. Now, having come full circle back to Borrego, he is here for the long hall and plans to stay around with his wife and three kids.

After getting his Private Pilots license two years ago, Ranger Joshua tells stories of following in his father's footsteps, a Navy pilot, and grandfather's, a Marine pilot, as aviation men. Joshua joined the Ranger Academy in 2008 and became a Field Ranger in Silver Wood Lake State Recreation Area and then in the Redwoods National Park, Ca. He requested a transfer to Anza-Borrego in October of 2014, where he was a Field Ranger before accepting the Ranger Pilot position in March 2016. "I have the same rank and file as a regular Ranger, but my essential duties are a little different," Ranger Joshua stated. "Flying this airplane is a childhood dream of mine, coming home (Borrego) is a dream come true."

His plane is a Aviat Husky A-1 that can hold up to fifty gallons of fuel and has a constant speed propeller; which lets you set the RPM's to a certain amount causing the propeller to twist, creating more or less drag to keep the RPM's constant. The plane is also equipped with a siren, P.A. system and equipment to help him locate sheep.

While asking Ranger Joshua why the Anza-Borrego State Park needs a patrol aircraft, he relied, "Because of the diverse terrain here, like mountains, canyons, washes and flatlands, the benefit of a pilot is that you have a different perspective from the air; which allows me to access areas faster than Field Rangers. Sometimes its areas that are hard to get to and I can see from the air how to help or get help to people. Not only do I fly over and patrol the area, I am a resource for local law enforcement agencies. From my perspective, I can locate a problem, assess the issue and relay GPS coordinates to the appropriate agency so that they can be of assistance."

Ranger Joshua explains that his most memorable moments are when the plane first takes off, its like a "Ocean of air and the plane becomes a part of your body and your sense of reality is altered. It's a cool feeling." 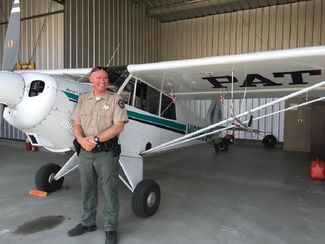 Although being a pilot brings it's own unique challenges, Ranger Joshua has gone though extensive training to make sure he is physically capable to maneuver the aircraft in high winds and random dust devils that are no strangers to our desert. "Having continuous training in unusual attitudes, spins and high gust wind situations is a crucial part in remaining safe up there."

When asked about future plans and how the public could come out to see his aircraft and ask him questions, Ranger Joshua replied, "I would like to have a 'Coffee with a Ranger' day and educate locals and visitors about our amazing state park. Being the pilot gives me unique insight of operations on the ground, ways to be safe, what to look out for and, more importantly, just where not to go. I would love to share with anyone if they are interested."

The next time you see a sign that reads "Speed limit controlled by Aircraft" or a airplane in the sky, look for the words "Ranger Patrol" on its wings and be sure to wave at Ranger Joshua and welcome him to our desert.