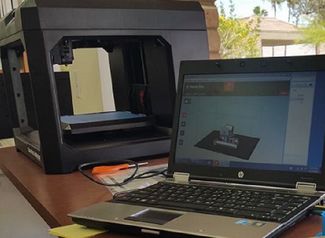 The library's 3D printer. Available for anyone of any age to create ideas on.

New technology can be daunting no matter what age you are. With the constant modernization of computers, printers and cell phones it can feel as though you need to learn a new language with every technological development and sometimes finding the resources to cure our computer confusion can be just as difficult.

Chris Consol splits his time between Julian and Borrego, living and working in the town as an independent contractor. Having spent a number of years in the skateboard industry and involved in exciting projects for other people, Consol has achieved something that many people could only dream of, he has become an inventor.

His patent pending invention is a new design on a familiar idea, created in an extraordinary way by using a 3D printer that sits in the Borrego Springs Library.

Consol knew nothing about 3D printers when he began, other than they are expensive and hard to find. "I had an insane amount of luck" Consol explains modestly, "everything I needed was just sitting in the town for me."

He read books, used the library's internet and watched Youtube tutorials in order to learn how to use the various software packages needed. A brand new language and a new skill that has allowed him create an action sports camera to use on ski boards, longboards and skateboards.

A design that has unique enough properties that the library was needed once more in order for Consol to study books on law and trademarks in order to pursue filing a patent. A lot of small budget entrepreneurs would turn to Kickstarter or Gofundme to raise the funds required but, as Consol discovered, they aren't the only options out there. Using the library's internet, Consol found a state funded program that links inventors with lawyers who work pro bono to assist in patent requests.

Consol admits that he "honestly thought it was impossible." Borrego not only boasts a library with facilities that you would otherwise have to drive over 50 miles for but the town also has a skate park that he has utilized to test out his design.

"Don't be afraid to try" says Consol, "the world is very intimidating with big businesses against you. People will tell you it's not easy to invent or to manufacture, but go with your gut and show initiative. The rewards are huge, not just the financial rewards but the whole process."

Michael Voss, Branch Manager at the Borrego Springs library has watched with pride as Consol has embarked on his journey and he is keen for more people to follow in his footsteps. "As part of the grant process we had a demonstration month on the MakerBot 3D printer which Chris was able to take advantage of." 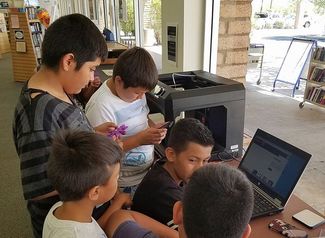 Children have been exploring the 3D printer. I wonder how many will follow in Chris Consul's footsteps.

The library has a range of software packages to explore which Voss is happy to demonstrate. As part of the printer package, they have the MegaBot library that children have been using this week to print Lamborghini's' which they're painting and taking home. Thingiverse software which is an opensourse program that allows users to share designs and Tinkercad which is used to create an idea from scratch. If you have an .obj or .stl file, you can bring it in to the library and download your own design.

A small design, costs $5 and a large one $15, the library charges for the cost of the plastic and nothing more. Some designs will take hours, so they are left to print overnight and ready to pick up in the morning. Voss is keen to let children use the printer for free. We're only limited by our own imagination, as the library is happy to provide everything else.

So why not bring your child to Borrego Springs library so they too can explore, create and invent.