RAAM's Race Across the West 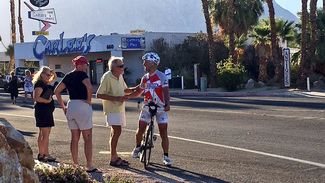 The first cyclists came through Borrego Springs in a blur, as the riders continue on their epic Race Across the West (RAW). Starting from the beach in Oceanside and finishing on the Animas River in the cycling mecca of Durango, CO., Christmas Circle is one of the many sights they will encounter on their way. For Danish solo cyclist Palle Nielsen, it was an opportunity to meet supporters cheering him on through the heat, as they waited outside of Carlee's.

Cyclists come from all over the USA and as far away as Japan and Europe to compete as solo riders and teams, with their support crews following them every step of the way. As the racers follow the course, it's the support crews job to fix problems, keep up moral and provide them with food. This means that from 7.00 PM to 9.00 AM, the support car has to be within 50 feet of the rider at all times.

All though some support crews will follow a rider throughout the whole competition, some will only do certain legs, the dedication shown by everyone involved is staggering. Solo cyclist Robert Ferris has trained solidly for eight months, and has a crew of 10 people supporting him.

Rider James MacDonald is from Scotland and is competing for Project Kansas (projectkansas.org). The UK team is made up of eight members who support MacDonald, with two vehicles and one RV. By using bio-metric data and environmental conditions, the team use high tech solutions to determine the optimum times to feed MacDonald and when to let him rest.

Deputy crew chief Tony Court, flew in from London "This is my first time in the US desert, Borrego is awesome. The view coming down the mountain is awesome and so amazing. However, I have never been in a place that is 100°f at 5 PM. That will take some getting used to, but the beauty makes up for it. I am so thankful to our sponsors who made this possible and I could come to Borrego Springs."