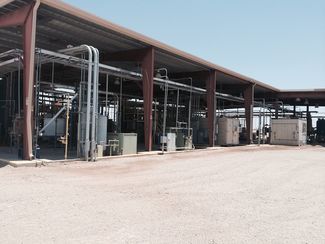 'Simbol Materials Inc. began with a vision' that is the opening line on their website. Simbol Materials, the subsidiary company created to operate the Lithium plant, sitting on the edge of the Salton Sea, which was to bring hope and employment to thousands of people, has gone from being a vision to a nightmare.

Officially closed, Simbol Materials has filed for bankruptcy and sits empty. A quiet reminder of how the areas hopes have once again turned to disappointment.

Press releases announced Simbol's plans to use ground breaking technology to co-produce critical materials, all sourced from the most prolific mineral-rich brine source in the world. Tesla visited the site with talks of a gigafactory being built alongside the plant. The prospect of a cutting edge new industry and renewed employment for the area, brought shouts of salvation.

In 2015, after all the talk and the tests were completed, the workers were fired and the plant closed down. Despite the success of the project in the initial stages, the abundance of raw material sitting waiting to be extracted, any hope of Simbol Materials rising from the ashes can be officially laid to rest.