Sister Anza-Borrego and the Mongolian Rangers 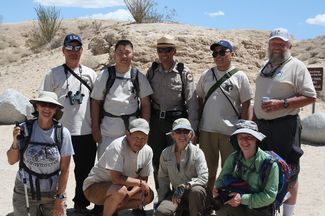 On May 18 Borrego Springs was visited by four rangers from the Ikh Nart Guluu Nature Reserve in Mongolia.

The governor of Dalanjargal soum, the district that manages Ikh Nart, D, Bold and Mark Jorgensen, signed an official agreement in June that will foster relationships between both protected areas. As part of the agreement, AnzaBorrego provided equipment and training to the staff of Ikh Nart Nature Reserve. The agreement has also led to the development of a ranger program and improvement of border signs.

Although farther north and generally cooler than Anza-Borrego, the Ikh terrain is strikingly similar in variety and natural beauty. Three of the rangers took their first airplane flight, saw their first ocean, swam in a pool for the first time ever and said they are taking a lot of memories and new skills home to Ikh Nartiin Chuluu Nature Reserve. They are now on their way to Denver and the World Ranger Congress.