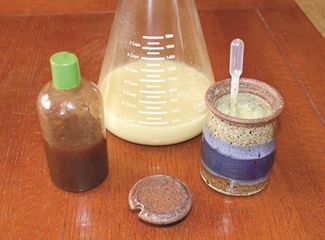 Are you in pain? Are you being prescribed pain relief medications or self-medicating with alcohol or other over-the-counter compounds, using transdermal patches, braces or portable TENS Units to get just enough relief to go about your daily routine?

Or maybe you are without insurance, on a fixed income, see a doctor, but still have trouble getting your medicines on time and paid for.

After a period of treating pain, you may have become addicted to narcotic medications and may now even be given further prescriptions to ease 'opioid constipation.' One thing tends to lead to another, and the pharmacy is always there with the next chemical remedy.

Maybe you have Fibromyalgia, Osteoarthritis or even prostate cancer. Stage four non-Hodgkins Lymphoma was diagnosed in one local resident nearly twenty years ago, when he joined a control group at Scripps Escondido, who wanted to try a specific protocol called CHOP:

This patient presented with thirty-six walnut-sized tumors from his neck to his pelvis and was, at that time, given two days to two weeks to live by his Oncologist.

Today, he ponders where he will spend his summer vacationing, now that he is walking with minimal pain and no longer confined to crutches. His doctors say his knees and hips are bone on bone, but he is controlling the pain by maintaining a healthy and happy attitude, eating Kosher foods and applying a topical agent, along with an ingestible formula, both derived from what is known as CBD.

After fourteen years of traditional chemotherapy infusions and chemical cocktails; having survived prostate cancer; now in remission; having his bladder occurrence excised, this man, whose prostate was 90 percent 'consumed' one year ago, can now say, after nearly two years of using CBD, his cancer is thirty percent decreased.

Cannabidiol (CBD) is one of at least 69-85 active cannabinoids identified in the cannabis plant. It is a major phytocannabinoid, accounting for up to 40 percent of the plant's extract. CBD's healing properties are fast becoming exposed through scientific exploration as a non-intoxicating cannabis compound with significant therapeutic applications.

Cases are beginning to surface as tumors are decreasing in size, bed-ridden patients are up and walking, and the depressed and suicidal have renewed hope that their afflictions of all kinds can be managed and possibly cured with the availability of this new found, formerly needlessly vilified agent.

Just in talking with one local man who is benefiting from CBD, stories begin to surface of another man he knows, another woman who's been helped, etc., while it appears that an informal sort of CBD cooperative is beginning to take shape. These folks have gotten themselves informed, networked with others to find resources, and are finding immediate, simple relief for their medical maladies. One website they've found to be scientifically informative is http://www.projectCBD.org.

One gal with a shattered ankle was bedridden as she treated with CBD topical lotion, and was walking again after two weeks. Another lady with a hand locked up and immovable with arthritis tried the topical, and with three treatments, could open and move her hand with minimal pain.

The original Scripps control group our neighbor took part in has since lost all its members (93 people) to death. (They were not doing CBD trials.) This man is the sole survivor, and now swears by the life-changing properties of CBD. Of course there are, "90 - 94 percent fewer carcinogenic agents in Kosher foods," he smiles, knowing laughter is the greatest healer. He also regularly consumes probiotics, yogurt and he roasts his own organic coffee beans and practices meditation in addition to single doses of CBD/CO, as he calls it, twice daily.

Different cannabis plants have varying ratios of CBD to THC (the element that is known for its euphoric effects). So it is best to find a strain that is intentionally propagated to be higher in CBD than THC for one to experience the healing and not the high. One particular strain known as 'Charlotte's Web' can have a 5:1 to a 14:1 ratio of CBD to THC, rather than the typical ratio of most strains sold for recreational relaxation, nausea and anxiety disorders, among others.

Using Charlotte's Web in a recipe along with organic coconut oil, a CBD ingestible compound is formed. Then, also a topical is made using CBD, aloe vera gel and a bit of lavender oil that applies to the skin without a sticky or greasy residue. He calls that formula CBD/AVG.

The effects are cumulative and residual. The CBD has a way of referring to other pain in the body, be it superficial or deep tissue pain. It finds and helps both.

CBD is NOT on the national list of controlled substances. It is NOT illegal to use or possess, and it is non-addictive, but if you want to use and obtain these products, you must hold a Medical Marijuana (MMJ) ID and prescription. Nearby, MMJ prescriptions can be obtained through Greensite Medical Evaluation Centers (walk-ins welcome). There are four in the Palm Springs/Rancho Mirage area. From there, research dispensaries and get yourself informed.

The nearest dispensary to Borrego Springs is ShowGrow on Montecito Way in Ramona. As of this printing, they are not yet stocking edibles or CBD products, but greater resources exist in Coachella, at C.V.C.C. on Avenue 48, at Organic Solutions of the Desert, on Ramon Road in Palm Springs, and many more in Escondido and San Diego.

Delivery services are more numerous than the dispensaries and many are available seven days a week and open late. Let the healing begin.