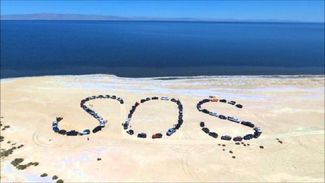 On April 23 the Tierra del Sol four-wheel club came to the Salton Sea to show their support for the efforts being made by EcoMedia to save the Salton Sea and to draw attention to the immediate need to save the Sea. More than seventy four-wheel drive vehicles took part in an all day event and tour around the Sea.

The first stop was at the World War II military training facility where old bunkers could still be seen. At this location, the EcoMedia staff stationed themselves well ahead of Tierra del Sol's arrival to rope off and flag the areas where the jeeps would be directed in order to spell out the letters SOS (Save Our Sea) for drone arial filming, media filming and pictures. When Tierra del Sol arrived, nothing else could have been a more impressive sight to see than seventy jeeps coming toward you, bouncing one way and another over rough desert terrain, then winding to pass one of the old military bunkers after which a single, miles-long line was formed. When their destination was reached, Kerry Morrison and staff were waiting to greet and give instructions.

Next, southward bound to the furthest southern point of the Sea to view and film the existing IID and State wetlands wild life habitat and to get a glimpse of wetland habitat construction at Red Hill Bay. The wetland projects maintain air quality monitoring programs, dust mitigation programs, vegetation enhancement studies and energy programs. IID and the State of California intend to expand the wetland wildlife habitat from a few hundred acres to a few thousand acres in the coming years. Just before reaching the wetland wildlife habitat, the group crossed over the Alamo River, which supplies a small amount of fresh water to the Salton Sea. This was interesting to see because it puts the fresh water flowing into the Salton Sea into perspective.

Volcanic mud pods are within the wetland wildlife habitat and they were next to be seen on the tour. This was the most fascinating, mesmerizing and dangerous area on the tour to Save our Sea. Some of the pods look like prehistoric pterodactyl nests when dormant. The pods are directly on top of the San Andreas Fault and more than boiling hot, spewing boiling mud, very much like a boiling-over kettle of soup. The day was filled with spectacular sights around the Salton Sea. To view the film of this event and acquire more information about the Save our Sea activists movement, go to any one or all three sites: