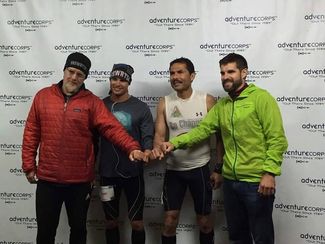 Having followed the racers from their start in Salton City, through to Borrego Springs and on wards, it was only once nightfall had begun to set in that it was time to leave the runners to it. Yolandi Jooste of the Sun did however, manage to catch up with Chris Kostman, founder and organizer of AdventureCORPS Badwater races, who exclaimed, "I'm excited that the Borrego Sun is tweeting more than me."

Thankfully, Borrego Springs Resort was once again chosen to house the athletes prior to the race and acted as checkpoint 3 during the race so it was there that Kostman explained a little more about the event.

Kostman said "In this race we have 90 racers, 39 teams with at least 2 people in a team, but there are people from 9 different countries. We have about 40 more people than last year. It's a great turnout and brought about 180 people to Borrego."

Despite the race starting off a little behind schedule, all the runners and their support crews remained in good spirits.

"The race started a bit late because of the racers getting weighed." said Kostman, "They need to be seen by the medical team to see if their weight is up or down and with forty more people it took some time. We also have these GPS trackers that we attach to each team and it has to be mounted to them, and that took time." The time, effort and equipment needed to ensure the runners maintain their health and stamina is astounding with special attention going to food that can be eaten quickly and still give all the nutrients and water required to keep them going. "With gaining and losing weight, what happens is people can drink too much plain water and get what is called Hyponatremia. This means they flush all the electrolytes out of their system and their blood which is extremely dangerous and you could die from it."

Prior to the race beginning, teams were invited to arrive at Borrego Springs Resort two days early to hike through the trails that their support teams would not be able to follow them on. The Anza Borrego Park offers the runners the unique off road terrain lacking in other races.

"Part of our team is going up to mark the whole trail that the racers will take up Montezuma with pink flagging tape. Then, they will hike back down to meet the racers when they get there and hike up with the last team to take the pink tape down. We are making sure that we follow State Park guidelines and clean-up after ourselves."

All of the racers must complete the 81 miles during a 28 hour period. The race begins at 6.30 a.m and finishes 10.30a.m. the following morning. During that time frame runners must also complete time requirements at the various checkpoints. For seventeen racers, including a husband and wife team, Badwater Salton Sea is only the second leg in a long journey as they are run in all three Badwater Ultra Cup races.

Kostman stated "The Borrego Springs Resort has been great." The atmosphere was upbeat despite the time pressures and the amount of people being catered for and the resort did an amazing job. All the runners came away with a great experience.

Kim Daniel of the Borrego Springs Resort & Spa was keen to express her enjoyment of the event, "We're thrilled each year to partner with Badwater Salton Sea! This was the fourth year of this particular Badwater race, and we have delightedly been a part of the event since the beginning; watching the excitement and participation grow over the years. Working with Chris Kostman and his AdventureCORPS team is an absolute pleasure, and we appreciate the opportunity to be of service to the racers and their teams, and have nothing but great interactions with them. We are honored that Borrego Springs Resort & Spa will again be the Badwater Salton Sea's host hotel for the 2017 event, April 30-May 1." 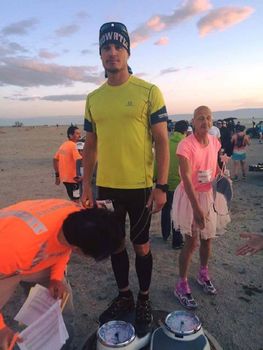 "I'm amazed that there is not a race that has you run to all the metal sculptures out here in Borrego, it's a no brainer – it would be amazing." said Kostman. Maybe next year and Borregans will be out in force cheering them on.

I know everyone at the Sun enjoyed following their journey at a more sedate pace. Yolandi Jooste said "It was amazing to see them run and lift each other up when they were tired. It was also nice, as the newspaper reporter, for some of them to thank us for meeting them in places because it was encouraging to them to see us - like little check points in between their time stops."

Congratulations to everyone who competed and well done to the winners Jared Fetterolf and Ray Sanchez of Team J-Ray who came in with a very respectable time of around 15 hours.