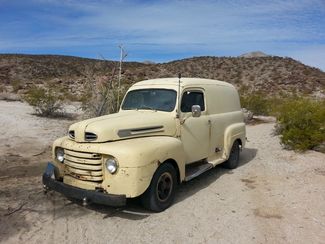 This is starting a new era for me, and the kind people at the Borrego Sun. They were good enough to run my three stories about my adventures with my sidekick Denny. I'm hoping you enjoyed them, as much as I had fun telling them. Each issue, I will take a certain year and make of car and share with you some interesting facts about different vintage automobiles. If you have questions or comments, I would like to hear from you. I hope this column will be a fun exchange between you the reader, and me, Henry the Panel Truck!

Most of the vintage information will be Ford-oriented, as I am a Ford, and that is what I, and what my sidekick, Denny are most familiar with.

So lets begin with (my name sake) Henry Ford's Model T. This car will take several issues to complete as it has quite a history. The T legacy began in the very early 1900s. People were changing from the horse and buggy to a machinery-oriented era. By 1925 the model T had established itself as a major contributor in the mass transportation of the American public. The car was affordable, easy to fix and maintain, and priced well below the other car manufactures of that era. To start a Model T, you had better know the basics, or you would be in for a rude awaking. A broken, or sprained thumb would be your first lesson on starting a Model T. The single button push to start/stop was many years away! Along with all the other things things we take for granted as 'basic' options on our modern day automobile.

On each side of the steering column was a lever that moved up and down. The left one was to advance or retard the spark (timing). The other controlled the gas/speed of the motor. There was no foot pedal; that came about much later. You would turn the key 'on.' A series of four coils in individual wooden boxes, would begin to 'buzz.' You would pull the emergency brake all the way back. This would also put the 'transmissio' in neutral. You would pull the 'spark' lever all the way down, and just barely move the gas lever down. You then went to the front of the vehicle and took a hold of the crank handle. You pushed the crank in to engage the crankshaft, and turned the motor until the crank was between seven and nine o'clock. Making SURE your thumb was on the same side of the crank handle as your fingers!

You then gave the crank a quick pull. If the stars were in perfect alignment, and your motor in fairly good condition, the motor would roar to life! You would have to run back to the drivers' side and move the spark lever up enough so the motor would idle smoothly, or it would quit. – to be continued.