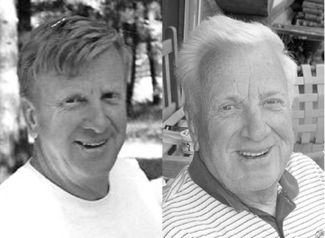 Lynn Christopherson passed away Friday, Feb. 19 at the Woodside, California; home of his sister, Dawn. Born in Joliet, Montana, Nov. 1, 1934, Mr. Christopherson moved to Chico in 1950. He graduated from Chico High School in 1952 and Chico State in 1963. Mr. Christopherson served in the United States Air Force and Reserves from 1955 to 1963.

Teaching was his passion and he loved the interaction with his students. He used his unique sense of humor to engage their interest, writing his own lesson plans and worksheets, tailoring them to his students' personal lives – much to their amusement. "Mr. Chris or Mr. C" was a popular mathematics teacher at Durham High School from 1964 until his retirement in 1999. He started tutoring math students at Borrego Springs High School a few years ago and was named volunteer of the year. To his great delight, this led to Mr. C teaching mathematics full time again at BSHS until his death. He loved his students.

Mr. Christopherson also took up woodworking in retirement and became an accomplished woodworker. He was known for his jewelry boxes; many of which he donated to local charities for fundraisers.

He was on the Chico State Varsity Golf Team and had a seven handicap; he was known as a sandbagger. Mr. Christopherson also played on championship bowling teams over the years and could clear the table in pool.

Lynn was preceded in death by his parents, France and Adaline; brother, Kay and sister, Joyce. He is survived by his son Scott Christopherson (Shawn) of Chico, CA; his daughter Kirstie Christopherson (Nance) of Ashland, Oregon; his grandchildren Shane and Claire Christopherson of Chico; brother Dale; sisters Beth Baxter, Dawn Dickman and Melva Storke; as well as numerous nieces and nephews; many of whom he taught to fly fish!

Mr. Christopherson had a unique personality and was a 'bigger than life' person whose sense of humor and generosity will be missed greatly by the many people whose lives he touched.