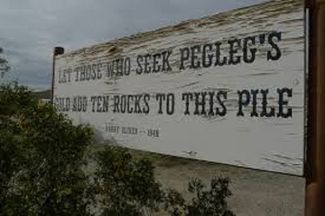 As unbelievable as it may sound, the State of California spent taxpayer's money to create an official state historical landmark to commemorate a man known as a "spinner of tales" - a prevaricator par excellence. The Peg Leg Smith Monument is No. 750 of the California Historical Landmarks and was erected on October 9, 1960, by the California State Parks Commission in cooperation with the Borrego Springs Chamber of Commerce. It is located on Henderson Canyon Road, 1,000 feet north of Peg Leg Road/Highway S-22, seven miles east and north of Christmas Circle in Borrego Springs.

It is also the site of the annual Peg Leg Smith Liar's Contest; held each year on the first Saturday night in April when contestants relate stories of lost gold that perpetuate the legends stemming from the greatest prevaricator of all times – Thomas 'Peg Leg' Long Smith, who, according to the wording on the historical monument, lived from 1801 to 1866 and was a mountain man, prospector, and a grand tall-tale teller. It also states that, "Legends regarding his lost gold mine have grown through the years, and countless people have searched the desert for its fabulous wealth. The mine could be within a few miles of this monument."

This year is the 100th anniversary of the event, according to Peg Leg's official PR agent and Hollywood art director Harry Oliver, who claimed to have started the Liar's Club in 1916. The event is free and will be held in front of the Peg Leg Monument on Saturday, April 2. The official sponsor is the Old Borego Pioneer Society, which will be selling hats and t-shirts at the event to commemorate the 100th anniversary. All contestants will be awarded a recycled trophy and a certificate of participation. Fur trapper Thomas Long Smith became another revenant, like Leonardo DiCaprio, after surviving an Indian attack and amputating his own leg. He then fashioning himself a wooden leg and became known as Peg Leg Smith. Peg Leg supposedly found his legendary black-coated golden nuggets somewhere near three buttes in the Borrego Badlands while carrying furs to be sold in Los Angeles. The location of his fabulously rich find, rivals the Lost Dutchman mine in Arizona as the most famous lost mine of the Southwest. His many exploits as a mountain man, Indian fighter, adventurer, horse thief and trader, coupled with stories of his lost mine, provide the grist to induce many to buy Smith whiskey in the saloons of San Francisco in the later years. After his death, tales abounded, creating other Peg Legs who roamed the Southwest.

One of the more famous Peg Leg prospectors was Henry E. W. Wilson who spent over fifty years looking for Peg Leg's gold. According to Wilson, Peg Leg was Thomas Smith who had a mine that he worked in the Chocolate Mountains. Others thought that the real Peg Leg was not Thomas but John O. Smith, who was a guide and horse trader. A Riverside County sheriff named Thomas W. Cover also became involved in the search for Peg Leg's gold and went on several expeditions. A friend named Wilson Russell went with him on a last expedition in 1884, and later reported that Cover had a gold nugget and a map to Peg Leg's mine. Cover was last seen in Borrego valley near the mouth of Coyote Creek before he disappeared. Charlie McCloud first became interested in Peg Leg's gold when he heard of Cover's search for the mine. In the years that followed, he faithfully searched for the gold, never doubting its existence. He had a heart attack and died in 1939 before he could locate the mine.

The biggest claim of finding Peg Leg's gold and the one that caused the greatest excitement was by a man in 1965 who called himself, "The man who found Peg Leg's black gold." He wrote many letters to the editor of Desert Magazine, always enclosing a sample of his gold nuggets, stating that he had discovered Peg Leg's gold ten years previously by accident and had since marketed $314,650 of nuggets by removing the black covering and selling them in Alaska and Canada.

The many stories caught the attention of early Borrego homesteader and Hollywood art director Harry Oliver, who named himself the official PR agent for Peg Leg Smith and created the Peg Leg rock pile across from his homestead, where today's historical landmark is found. A sign says to add ten rocks to the pile for luck in finding the lost mine. Oliver was also instrumental in beginning the first public contest that was held on Jan. 1, 1949. Each year some amazing stories are told, evaluated by a team of judges who award points for originality, costumes, audience reaction, props, and whether or not the real Peg Leg or gold is included in the tale. Points are deducted for including John O. Smith. There is both an adult and youth division.

Here are some samples of winning tales. Ben Stirduvant of Hemet once won when he explained why no one can find Peg Leg's mine. He explained that desert vandals had stolen 300 feet of the mine's shaft. The shaft was then bootlegged onto the black market and bits and pieces turned up later at a posthole digger's convention in San Diego. With no shaft, the mine is lost forever. Walter Frisbie's winning tale was about changing a tire in the desert one day. The jack sunk into the earth. When he pulled the jack out, the bottom of the jack was covered with a rare mineral combination of bullsite and bolonium. No one is quite sure what it is used for, but a great deal of it is exported to Washington, D.C., Sacramento, and other political centers. 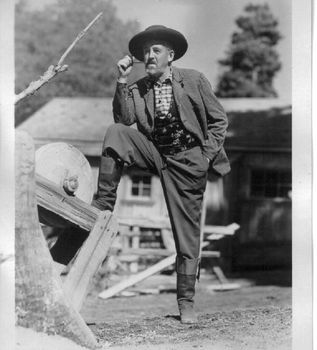 Dr. Martin Bravin of Tarzana won the contest one year with his story of how Peg Leg fell into a hole in the desert and was bit in the leg by a tarantula and then a rattlesnake. His leg petrified from the knee down. Using his knife, Peg Leg whittled down his petrified leg into a stump. Somehow he managed to stumble into the bighorn sheep feeding ground, where he was nursed and fed by a bighorn ewe. It was there that he found the gold among three butts, not buttes, which in later retelling of the story people have misinterpreted. The truth, according to Bravin, was that the sheep urine solidified and turned into gold. Braven concluded his winning tale by saying, "It was the pee-urest gold of all."

Check out 'Peg Leg Liar's Contest' on http://www.YouTube.com for several sites that have contestants from past years – many with ballads, like that written and sung by John Malcolm Penn or the group called Have Ukes, Will Travel, singing Borrego Jailhouse Blues. That should be the inspiration one needs to attend this year's contest or to enter the 100th anniversary. To be prepared, come with a 100th anniversary T-Shirt or a Peg Leg hat that can be ordered before the contest from the Old Borego Pioneer Society, P.O. Box 1706, Borrego Springs, CA 92004, or visit http://www.oldborego.org. Don't forget a chair to sit around the fire, and bring ten rocks to throw on the rock pile for good luck!