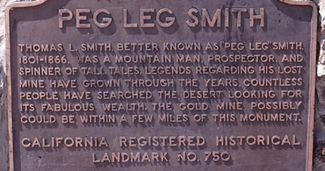 According to Borego homesteader and Hollywood art director Harry Oliver, the Pegleg Smith Club formed in 1916 when early day residents of the Borrego Valley gathered to tell stories. This is the claimed origin for the Pegleg Smith Liar's Contest, held annually the first Saturday night in April at the Pegleg Monument at the junction of Henderson Canyon Road and S-22/ Pegleg Road.

If you believe Oliver, then that would make this year's Pegleg Smith Liar's Contest on Saturday, April 2, 2016, the 100th anniversary of the story telling contest, which celebrates one of the greatest prevaricators of all time. Festivities begin at dusk. Bring a lawn chair and a story to share and participate. All contestants receive certificates and genuine recycled trophies. There are both youth and adult divisions in this family friendly event.

Judges award points for originality, costumes, delivery, audience reaction, and most importantly, including Pegleg Smith and his lost gold in the presentation. Sign up to tell a tale at the event. Anything goes – skits and songs are always welcomed. The annual event is sponsored by the Old Borego Pioneer Society (OBPS) that has retained the original spelling of the name of the valley and community that developed here over 100 years ago. The OBPS is selling hats and T-shirts for $20 each or $35 for both to commemorate the 100th anniversary.

You can read more about this contest in March 10, issue of Borrego Sun