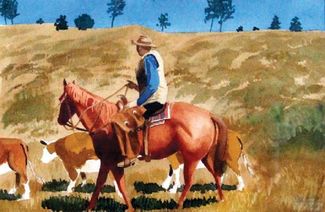 Following the sad passing of beloved artist, singer, father and husband, Richard Bye, Borrego Sun online looks back at the achievements and work of the much loved Borrego resident.

Richard Bye - Died peacefully in his sleep at the Mountain View Cottages in Borrego, on Feb. 26th.

Self-taught artist, Navy man and publisher, Richard Earl Bye sits surrounded by memories of a wonderful life of travel, perfectly transferred to paper and canvas through his hand. "I carried a pad and paints with me wherever I went," says Bye, who started painting as a young boy. "My father took me to art school in Maine when I was ten years old. The teacher told him to, 'leave me alone,' and I have been painting ever since. "In Maine, I did a weekly portrait. They were of notable people in Portland, and I called them "Seen by a Schoolboy." Bye received pay for these, his first 'professional' paintings.

Bye's mother was an opera singer. His father, he says, was a 'boy genius' on the piano. The family had a musical group they called the Bye Family Ensemble. Young Richard tried piano lessons, but did not pursue it. Instead, he chose the trumpet. His sister played violin, and he recalls, played once in Borrego with pianist Joe Ross.

Publishing was another of Bye's interests, and he worked in New York to eventually become publisher of the trade magazine Publisher's Weekly and also the Library Journal. It was during this time that his current wife, Nancy, went to work as ad sales manager for both of his publications.

Nancy left New York for work in California, and landed in Del Mar, renting in Solana Beach. Her son Jonathan remembers, "oh, the cool pool breezes," they enjoyed after moving here from the east coast. Jonathan attended Torrey Pines High School and then went on to college.

Richard Bye came out to California from New York in 1972 to help Nancy build 'Nancy's Fancy,' a shop she ran with her mother. Bye landed work at Architectural Digestmagazine and became publisher for Architectural Digest Books in Los Angeles. He can also claim the title 'founder' of Publisher's Marketing Association. Bye and Nancy married two years later, on August 24, 1974. Together they traveled abroad to attend yearly book fairs in Frankfurt, Germany, where publishers from around the world gather to show and trade. They traveled to Europe at least thirty times and attended the London Book Fair twice. "We enjoyed France more than anywhere else," said Nancy, reminiscing.

Living in Del Mar Heights, an inland building boom was occurring in 1982-83 and was referred to as North City West, now known as the Carmel Mountain area. This led the couple in 1987 to chance a visit to Borrego Springs in their Volkswagon camper. They asked themselves, "What's the matter with this place?" They met Elsa Chambers and after one hour of discussion, started looking for a home here. They purchased an Andy Paulson-designed home in Deep Well and live happily there to this day. Golf and tennis were on the daily agenda for Richard, beginning at 6:00 a.m., he would play until 9:00 and then come home to paint from 9:00 to noon.

Dori Holladay was instrumental in showcasing Bye's paintings. "I want you to have a show at La Casa," she told him. The Byes shopped for framing materials and spent $2,000 preparing for the exhibit. Opening night, Bye easily sold that $2,000 in paintings, and so became known in Borrego Springs for his exceptional talent.

Other gallery shows included the Borrego Art Co-op in The Center, then run by Gaile Anne, and the Matson Gallery, later housed in the same building. A Bye painting once showed up and sold immediately at the Frugal Coyote Boutique. "I used to feel embarrassed about painting. My father promoted me. He was obviously very proud of me," reflected Bye. When asked if he has any advice for young artists, Bye exclaimed, "Paint!" "Just keep doing what pleases you," he smiled. The twinkle in his eye, still vibrant, like the memories of his colorful life.