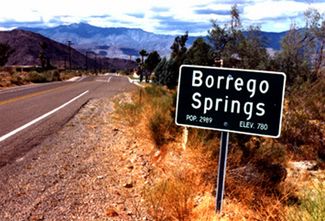 The healthcare survey results have been tallied and (BVEF) 'The Fund,' who sponsored the survey, with the help of the Borrego Springs Chamber of Commerce, has analyzed the responses.

The survey was conducted from Dec. 3 through Jan. 15 and reports a majority of respondents (53 percent) rated medical availablity here as "extremely poor" or "poor," while 47 percent say they go elsewhere to see their preferred doctor.

Specific personal answers have not been released as The Fund and the Chamber feel it would be inappropriate to the process.

Topping the requests are more physicians, family practitioners and specialists. The most requested services are urgent care, walk-in care and extended hours. The good news is, the money appears to be here.

While this year The Fund has initiated helicopter life-flight capabilities, contributed to healthy meals at the Senior Center, counseling for the school district and a UCSD air pollution study on particulates, it is apparent from the survey, the medical needs are not sufficient for residents and visitors of Borrego Springs to feel their health is being taken care of.

BCHF (Medical Center), communicating through a newsletter, states that when they opened the Medical Center for weekend hours recently, they only had one patient. The Fund financially contributed towards this. BCHF states that they then ceased extended hours and started planning for a new medical facility. That plan soon morphed into an Administrative/Pharmacy building and medical care was no longer being addressed.

"We have the business," stated Medical Center CEO Bruce Hebets at the initial Sponsor Group meeting where the building plan was introduced. Admitting they currently serve just forty patients per day at the pharmacy, 'having the business' must be referring to the distribution center they have created in Borrego, with pharmaceutical deliveries coming to the Palm Canyon Drive office and then transported to outlying clinics in the network and possibly to other pharmacies as well. Hence the need to increase the administrative workforce for the pharmacy.

We have been told our local pharmacy, being within a network of Federally Qualified Health Centers (FQHC), qualifies for substantial discounts in drug pricing. Manufacturers must offer '340b discounts' to covered entities (hospitals and other health care providers) to have their drugs included under Medicaid.

Covered entities are allowed to provide 340b drugs to individuals who are eligible patients of the entity.

In a public letter to drug manufacturers, BCHF CEO Hebets writes on behalf of the Medical Center, stating that a recent audit process by Health Resources and Services Administration (HRSA) found the organization was in non-compliance with certain requirements. "BCHF dispensed 340b drugs to ineligible individuals," and "BCHF was billing Medicaid contrary to information contained in the HRSA Medicaid Exclusion File. This action may have resulted in duplicate discounts." The Foundation is therefore in the process of repaying the manufacturers for those violations.

The local pharmacy, according to the survey, is the most used of all Medical Center services currently provided in the valley.

The posted yellow sign at the local pharmacy stating, "This pharmacy has been placed on probation from 7/7/15 to and including 7/8/18," led us to the revelation of the public records in the matter, which confirm the fact that the Department of Consumer Affairs for the State of California has filed the accusation against the Medical Center and a particular pharmacist.

It was ordered on July 1, 2015 that the Stipulated Settlement and Disciplinary Order was adopted by the Board of Pharmacy and became effective that week.

The order states that the named pharmacist failed to renew their license and was therefore placed on three years' probation in lieu of surrendering or having their license revoked.

Factual allegations state that the pharmacy did not report the controlled substances that they dispensed to customers between October 2013 and October 2014, as required by the US Department of Justice (DOJ), on a weekly basis. The year's data was then transmitted in full in November 2014, bringing the pharmacy into compliance. The code violation resulted from the data not being transmitted in the specified timely manner. Board of Pharmacy code dictates that pharmacies must provide detailed information about the pharmacy, the prescriber and the patient or research subject not more than seven days after the date a controlled substance is dispensed.

The order states the probation will remain in effect whether that particular pharmacist remains employed with The Foundation or not.