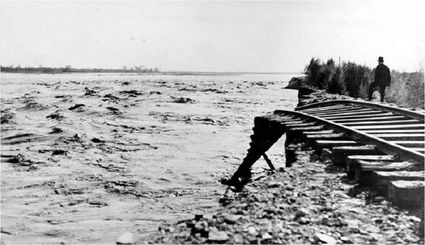 November 29, 1905 - the flood that created the Salton Sea began in earnest following the Colorado River Flood.

The events began in slow motion as a result of decisions to develop an irrigation system for the Imperial Valley over many years. The construction of a canal running from Mexico to the U.S to take the water from the Colorado River into the canal system began to erode disastrously.

"Throughout the month of August 1905, the intake continued to widen, with the caving away of its banks, and in September Mr. Harriman and President Randolph decided that another effort must be made either to close the break, or to regulate and control the flow of water through it. About the first of October, at the suggestion and under the supervision of Mr. E. S. Edinger, a Southern Pacific engineer, an attempt was made to close the channel west of the island by means of a six-hundred-foot barrier-dam of piling, brush-mattresses and sandbags.

This dam, which was built in October and November at a cost of about $60,000, might perhaps have checked or lessened the flow through the crevasse if nothing unforeseen had happened; but on the 29th-30th of November a tremendous flood, carrying great masses of driftwood, came down the Gila and increased the discharge of the Colorado from 12,000 to 115,000 cubic feet per second.

The dam could not withstand such pressure, and even before the peak of the flood was reached it went out altogether, leaving hardly a vestige behind. As a large part of the island was eroded and carried away at the same time, further operations in this locality were regarded as impracticable. The crevasse had then widened to six hundred feet, and nearly the whole of the river poured through it into the deepest part of the Sink, where there was already a lake with a surface area of one hundred and fifty square miles.

The main line of the Southern Pacific, in many places, was almost awash, and the whole population of the Valley was alarmed by the prospect of being drowned out. If the break could not be closed and the river brought under control before the period of high water in the spring and summer of 1906, it seemed more than probable that sixty miles of the Southern Pacific track would be sub merged; that the irrigation system of the California Development Company would be destroyed; and that the whole basin of the Imperial Valley would ultimately become a fresh-water lake."