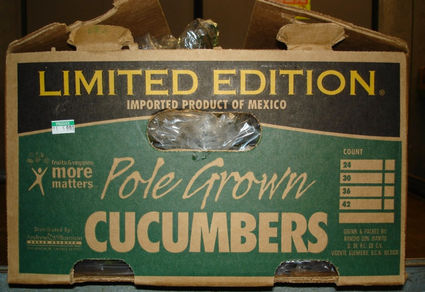 Shipments of cucumbers have been recalled due to Salmonella serotype Poona. The vegetable, distributed by Andrew & Williamson Fresh Produce, was shipped to 22 states. California Department of Public Health has reported 285 cases in 27 states, with 51 cases from California. A California woman died from the illness.

CDPH warns consumers not to buy cucumbers distributed by Andrew & Williamson Fresh Produce, and to ask their grocers if the cucumbers they purchased fall under the warning, since it is highly unlikely that the cucumbers in stores will have identifiable brand information.

The produce company located in San Diego, voluntarily recalled the shipments of cucumbers grown in Mexico by Rancho Don Juanito after finding a correlation between the vegetable and the Salmonella Poona outbreak. The cucumbers were shipped in black, green and yellow colored cartons with "Limited Edition Pole Grown Cucumbers" printed on the label. The infected cucumbers are dark green and measure 7 - 10 inches. Domestically grown cucumbers are believed not to have any link with the outbreak.

The symptoms of acute gastroenteritis caused by Salmonella include: sudden onset diarrhea, that can also be bloody, abdominal cramps, fever, nausea, vomiting, and headaches, according to the CDC. The illness can last to up to seven days. Children under 5, adults over 65 and people with weaken immune systems are more likely to have a severe illness.