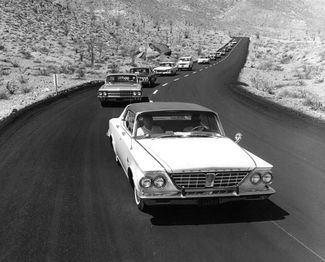 This story was featured in the July, 1964 issue of the Borrego Sun. It is the follow-up of the Montezuma road opening.

"Two ribbons were cut, and ten years of waiting and hoping came to a happy ending here June 24, as Montezuma road was opened to traffic.

A crowd estimated at nearly 1,000 joyfully braved the hottest day of the year (the thermometer hit a top of 114 degrees) to watch or take part in the colorful dedication of San Diego County's unique "glass elevator."

Montezuma road was thus described by James S. Copley, chairman of the corporation publishing the Copley Newspapers, in a talk at formal dedication ceremonies about two miles from the bottom of the road.

"One aspect of this road which we can claim is especially unique," Copley said. "Is that it provides for motorists a wonderful 'glass elevator.' some 400 stories tall.

"Behind their windshields motorists will drop down from an elevation of 4,000 feet, and mountain coolness, to the dry, warm floor of the desert. On their trip down they will view one of nature's great panoramas that extends on most days to the distant Salton Sea.

"So far as I know no other desert area can provide such a fast, spectacular approach."

Supervisor Robert Cozens dedicated the "road not only to the people of San Diego County, but to all who come here to enjoy our abundant resources, our perfect climate, our scenic splendors."

He paid special tribute to his predecessor in office, the late Dean Howell, during whose term construction of Montezuma road was started.

He also thanked the private landowners and the state division of Beaches and Parks for donating the necessary right of way and crews and officials of the county Road Department and the Montezuma Honor Camp who were responsible for construction of the road.

He said the county is now engineering a new route from Borrego Springs to the Salton Sea which will follow roughly the route of the old Truckhaven Trail, joining U.S. Highway 99 at Salton City.

Also being studied, in cooperation with both Riverside and Imperial County officials, he said, is a new route from Borrego Springs to the north.

Col. Karl von Voigtlander, USA, ret., president of the Borrego Springs Chamber of Commerce, welcomed visitors to the celebration and said the road signifies one of the freedoms Americans are enjoying in increasing numbers - the freedom to travel.

Cozens, with the assistance of Marilyn Druliner, Miss Borrego Springs, cut a ribbon to open the road, and a cavalcade of nearly 100 cars wound its way down to the bottom of the hill where a second celebration was staged by the Borrego Springs Chamber of Commerce.

The invocation was delivered by Ward Hutton of the Seventh Day Adventist Church here who prayed for the safety of motorists on the new road.

The Rev. William Mooney, newly appointed pastor of St. Richard's Catholic Church, delivered the benediction. He said it was fitting that the dedication should be held on the feast day of St. John the Baptist, "the patron saint of all desert people." 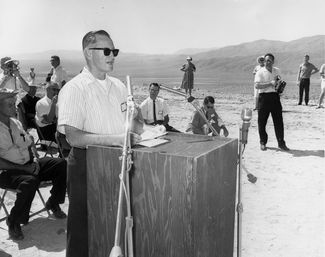 Eleven county honor camp inmates who worked on the road also were guests at the ceremony."