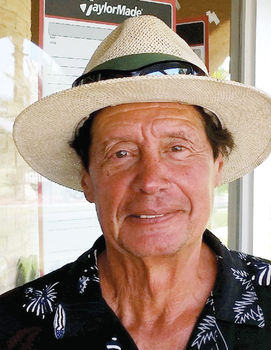 There are people you miss when they're gone. And then there are those who you reeeealy miss. For me, Manny Castillo was the latter.

He died on Sunday morning, July 26 at his home at the Roadrunner Club (RRC), succumbing to a heart attack at the age of 70.

Manny and his wife of 45 years, Karen, were already living at the RRC when I first moved to Borrego Springs in 2011. The first time I played golf with Manny, I knew he was someone special. And I wasn't alone. "I'm proud to call Manny a friend," says Greg Hankins, a fellow RRC resident. "He was always glad to see people, and I don't know anyone who didn't like him. He was a great athlete and excelled at more than just golf, although he played that game much better than most.

He was always happy to help others and could see tiny mistakes in a golf swing that he would help correct, if asked. There are many of us who hit the ball better because of him. "We miss you, my brother."

Manny was born and raised in San Diego in a family with eight other brothers and sisters, five of whom are still living in the San Diego area. He is also survived by a son, Eric, and his wife, Zahrina, plus a granddaughter, Jessica.

He attended Lincoln High School in San Diego, and Manny and Karen married in 1969. Mr. Castillo worked as a sheet metal fabricator, retiring in 2001 as a civil servant with the Naval Air Station Coronado.

Picking up golf in the 1980s, Manny developed his ability to focus off the tee, on the fairway, and especially on the green. The man was deadly from anywhere within a hundred yards of the pin. And he won the Senior's Champion and the Scramble tournaments at The Resort in 2015, an accomplishment about which he expressed to me with his usual humble pride.

"Manny was a real student of the game," says David Jones, Manny's friend and frequent golf partner, "and I learned much from him. He was always happy to offer suggestions for improving the game of his fellow players. I thoroughly enjoyed my weekly golf games with Manny and miss him very much."

John Peterson played with Manny several times, about his golf outings with Manny, he said, "It is amazing how that little guy could always 'hit it straight,' " adding, "and he had the ability to offer hints and suggestions that would straighten out your drive, too. Rest in peace, Manny."

Manny also worked part-time as a golf marshal at both The Springs at Borrego and at The Borrego Springs Resort, and was loved and respected by all.

Dan Wright says of Manny, "He was a stalwart at The Springs and RoadRunner Club, always with a smile and a willingness to help. All the RoadRunner and Springs family will miss him."

A celebration of life family service will be held in Alpine on Aug 28, and there will be a memorial service here in Borrego in November or December when everyone is back in town. The Sun will keep everyone posted on that event.