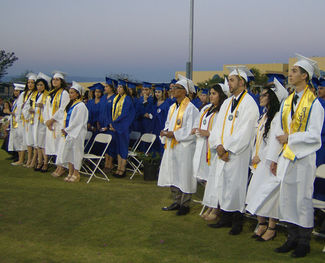 In 2011 there were rumors that the West Shores High School located in one of the poorest communities in the nation and rated by the Government as a 'Severely Disadvantaged Community' would be shut down by the State because the school was in the bottom five in the U.S. in academic achievements.

These facts did not diminish the hopes and dreams over the last four years of the year 2015 graduating students, teachers, and the parents who sacrificed so much to ensure their next generation will have an education and advantages to achieve the 'American Dream.'

In the speeches from graduating students, they gave tributes of gratitude to teachers and honor and gratefulness to their parents for their sacrifices and every word of encouragement.

Over the last four years, the graduating class of 2015 has ranked higher than Desert Mirage High School and Coachella Valley High School according to the U.S. and World News Report. In four years, this graduating class has achieved some of the highest awards in the nation, one of which is the Bill Gates Millennium Scholarship, awarded to Jennifer Gopar, Valedictorian.

On June 10, at 7:00 p.m West Shores High Schools graduation commenced. This particular graduating class and ceremonies could not have been more beautiful. For the first time in the school's history, graduation could be held outdoors on the school's new football/soccer/baseball field. Also for the first time, fifty-eight students, the largest graduating class would be graduating. The stage was flanked with flowers and, of course, the American Flag on one side and the California State flag on the other. Family and friends bearing gifts, balloons and flowers began arriving to get a seat an hour before the ceremony began. The top ten students parents were seated in front rows on either side of their graduating children who were seated in the middle front row.

Among these top ten graduates was an eleventh top graduate, 'Jose De La Torre.' His picture and a single red rose were placed in a chair where he would have been. Graduation meant so much to Jose De La Torre, he wanted nothing more than to be among his graduating class on this day and had earned his rank among the top students. Jose was in a wheelchair and one of his constant concerns that he asked about more than once was, "are you sure there is going to be a ramp for me?" Yes, dear young man, there is a ramp for you and you are honored as a member of West Shores High School graduating class of 2015. Jose passed away in December, 2014. He will not be forgotten by any of his classmates.