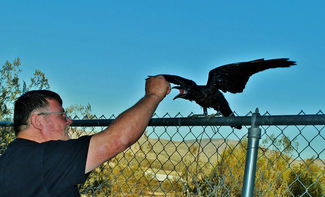 Resident of Shelter Valley, Rod Johnson, has a pet raven. He's given the raven a name, knows his favorite foods, and communicates with him. He'd like to see "Heckle" be independent though. Rod hopes Heckle will learn to socialize with his own kind one day soon.

Rod found Heckle and his two siblings on June 5. "I was walking my dog when I saw a raven fly out of an abandoned building so I went over to see what was going on. The ceiling tile had fallen down and a nest had crashed about 12 feet to the floor."

Rod took the newborn victims home and did his best to keep them alive, including waking up every two hours through the night to feed them. Heckle was the only one who ultimately survived, but the raven appears to be thriving. "I think he can take care of himself by now. He still likes to be fed though," Rod said of the adolescent bird. Ravens, it turns out, share numerous human traits.