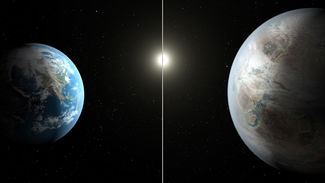 Astronomers just announced they've discovered the "closest twin to earth," seen so far. It's the smallest planet found orbiting in the habitable zone of a star and at about the same distance that earth orbits the sun. The twin to earth's sun is also quite similar to the earth's sun. "If plants were transferred there, they would likely survive" said John Grunsfeld, a spokesman from NASA. Kepler 452b- its rather uninteresting name- has a "substantial opportunity to host life." The discovered planet receives a similar amount of light and has the same length of year. It's 60 percent larger in diameter to the earth and 1,400 light-years away in the constellation of Cygnus. Grunsfeld said with improved satellites and telescopes, scientists may eventually be able to "make the first primitive maps of an earth-like planet and determine whether they have oceans, clouds, perhaps even seasons."