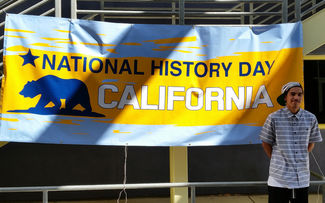 The NHD began in 1974 and it focuses on engaging students to explore the past. Students competing in the NHD surpass non-NHD students in standardized tests. They are also better writers who can eloquently present their point of view. Students are critical thinkers who can better analyze information.

They can also work in teams, interact with experts, and manage their time wisely.

Fuentes represented Borrego Springs against hundreds of participants from the different schools in San Diego County with his essay about the leadership and legacy of former U.S. President, Bill Clinton.

He chose the topic because Clinton left behind a positive and negative reform. During his presidency, Clinton greatly helped the U.S. economy and the country was in less debt. Though his retracted legacy began when he was taken out of office for something that wasn't illegal but rather looked down upon. "He didn't really do anything bad, but it shamed his wife and family," Fuentes said.

He attended the competition on Saturday, March 7 and met with the judges and fellow students. Everyone at school seemed more enthusiastic than Fuentes, wishing him good luck; he never thought he would win. But it wasn't until Monday he found out, "I was like ... someone is lying." He was surprised because there were hundreds of students competing from San Diego County.

His parents were very happy; his mom was shocked.

As the San Diego County winner, his essay was selected for the state competition in Sacramento on May 8. Though he didn't win, he had fun and it is an experience he will never forget. Not to mention that his essay is an excellent resume builder.

Fuentes wants to go to college, and though his mom wishes for him to become a doctor or lawyer, he wants to be a music producer. Music was also a reason he chose to write the essay on Clinton because he was a musician; he played the saxophone, Fuentes said.

"Generally, people tend to cope with their life decisions based upon the options they have available. The dilemma that many people fail to recognize, is that these very decisions are optional, therefore preventable."

"Desire is a common flaw found in everyone, especially in the most foolish of people."

"Clinton decreased dropout rate, and increased the number of students capable of receiving a college education. His agendas were based upon popular public opinion polls, and he became notorious for supplying the people with what they needed."

" ... he wasn't always interested in politics. As a matter of fact, he excelled in playing the saxophone. Before ever considering a life of political warfare, Clinton pondered how far his musical talent could take him."

"Clinton had not done anything to jeopardize the integrity of the constitution, nor did any of the atrocities he committed pose a threat to the American People. However, he did abuse and violate the trust of his beloved family."

"Our individual beliefs motivate our actions, those actions portray a character, that character reflects your morality. No human mind is alike, we each have different priorities and identities. Many people fail to recognize their foolish ways, especially when they are blinded by the ultimate form of ignorance, desire."